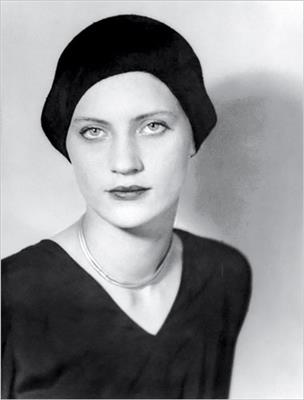 Elizabeth "Lee" Miller, Lady Penrose (April 23, 1907 – July 21, 1977), was an American photographer and photojournalist. She was a fashion model in New York City in the 1920s before going to Paris, where she became a fashion and fine art photographer. During the Second World War, she was a war correspondent for Vogue, covering events such as the London Blitz, the liberation of Paris, and the concentration camps at Buchenwald and Dachau.


Miller was born on April 23, 1907, in Poughkeepsie, New York. Her parents were Theodore and Florence Miller (née MacDonald). Her father was of German descent, and her mother of Scottish and Irish descent. She had a younger brother named Erik and an older brother named John. Theodore always favored Lee, and he often used her as a model for his amateur photography. When she was seven years old, Lee was raped while staying with a family friend in Brooklyn and infected with gonorrhea. In her childhood, Miller experienced issues in her formal education, being expelled from almost every school she attended whilst living in the Poughkeepsie area. In 1925, at the age of eighteen, Miller moved to Paris where she studied lighting, costume and design at the Ladislas Medgyes' School of Stagecraft. She returned to New York in 1926 and joined an experimental drama programme at Vassar College, taught by Hallie Flanagan, a pioneer of "experimental theatre". Soon after, Miller left home at the age of 19 to enroll in the Art Students League of New York in Manhattan to study life drawing and painting.


Miller's father introduced her and her brothers to photography at an early age. She was his model – he took many stereoscopic photographs of his nude teenage daughter – and he also showed her technical aspects of the art. Aged 19 she nearly stepped in front of a car on a Manhattan street but was prevented by Condé Nast, the publisher of Vogue. This incident helped launch her modeling career; she appeared in a blue hat and pearls in a drawing by George Lepape on the cover of Vogue on March 15, 1927. Miller's look was exactly what Vogue's then editor-in-chief Edna Woolman Chase was looking for to represent the emerging idea of the "modern girl."


For the next two years, Miller was one of the most sought-after models in New York, photographed by leading fashion photographers including Edward Steichen, Arnold Genthe, Nickolas Muray and George Hoyningen-Huene. A photograph of Miller by Steichen was used to advertise Kotex menstrual pads, without her consent, effectively ending her career as a fashion model. She was hired by a fashion designer in 1929 to make drawings of fashion details in Renaissance paintings but in time grew tired of this and found photography more efficient.


In 1929, Miller traveled to Paris with the intention of apprenticing herself to the surrealist artist and photographer Man Ray. Although, at first, he insisted that he did not take students, Miller soon became his model and collaborator (announcing to him, "I'm your new student"), as well as his lover and muse. While she was in Paris, she began her own photographic studio, often taking over Ray's fashion assignments to enable him to concentrate on his painting. So closely did they collaborate that photographs taken by Miller during this period are credited to Ray. Together with Ray, she rediscovered the photographic technique of solarisation, through an accident variously described, with one of Miller's accounts involving a mouse running over her foot, causing her to switch on the light in mid-development.