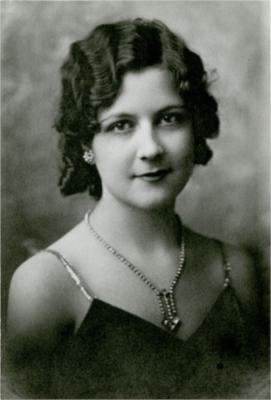 Dorothea Tanning was born and raised in Galesburg, Illinois. In 1926 Tanning attended Galesburg public schools. When she was attending high school Tanning "skipped" two grades, which led to a lifelong weakness in arithmetic. After attending Knox College for two years (1928–30), she moved to Chicago in 1930 and then to New York in 1935. There she supported herself as a commercial artist while pursuing her own painting, and discovered Surrealism at the Museum of Modern Art’s seminal 1936 exhibition, Fantastic Art, Dada and Surrealism. After an eight-year relationship, she was married briefly to the writer Homer Shannon in 1941. Impressed by her creativity and talent in illustrating fashion advertisements, the art director at Macy’s department store introduced her to the gallery owner Julien Levy, who immediately offered to show her work. Levy later gave Tanning two one-person exhibitions (in 1944 and 1948), and also introduced her to the circle of émigré Surrealists whose work he was showing in his New York gallery, including the German painter Max Ernst.

Tanning first met Ernst at a party in 1942. Later he dropped by her studio to consider her work for an exhibition of work by women artists at The Art of This Century gallery, which was owned by Peggy Guggenheim, Ernst's wife at the time. As Tanning recounts in her memoirs, he was enchanted by her iconic self-portrait Birthday (1942, Philadelphia Museum of Art). The two played chess, fell in love, and embarked on a life together that took them to Sedona in Arizona, and later to France. They lived in New York for several years before moving to Sedona, where they built a house and hosted visits from many friends crossing the country, including Henri Cartier-Bresson, Lee Miller, Roland Penrose, Yves Tanguy, Kay Sage, Pavel Tchelitchew, George Balanchine, and Dylan Thomas. Tanning and Ernst were married in 1946 in a double wedding with Man Ray and Juliet Browner in Hollywood and they were married for 34 years.

In 1949, Tanning and Ernst relocated to France, where they divided their time between Paris and Touraine, returning to Sedona for intervals through the early and mid 1950s. They lived in Paris and later Provence until Ernst's death in 1976 (he had suffered a stroke a year earlier), after which Tanning returned to New York. She continued to create studio art in the 1980s, then turned her attention to her writing and poetry in the 1990s and 2000s, working and publishing until the end of her life. Tanning died on January 31, 2012, at her Manhattan home at age 101.

Apart from three weeks she spent at the Chicago Academy of Fine Art in 1930, Tanning was a self-taught artist. The surreal imagery of her paintings from the 1940s and her close friendships with artists and writers of the Surrealist Movement have led many to regard Tanning as a Surrealist painter, yet she developed her own individual style over the course of an artistic career that spanned six decades.