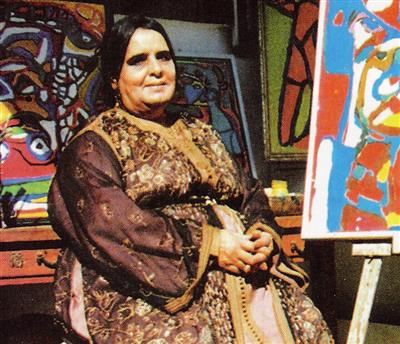 
Chaïbia was born in Choutka, a small village near El Jadida, Morocco in 1929. At the age of 13, she was sent to Casablanca by her parents to marry a 70 year old man. By the age of 14, she had given birth to a son, and by the age of 15 she had become a widow. When her husband died, she worked as a maid to earn money to support herself and her son. Talal was devoted to provide her son with an education, and focused on providing him with academic literacy. Talal herself would remain illiterate her entire life. Then one day she said she had a dream in which strangers would give her painting supplies. This inspired her to teach herself to paint and become a painter.


Talal was self-taught, and known for breaking traditional boundaries. Her work is categorized as a part of "outsider art". This style illustrates unconventional ideas by members of non-traditional art movements. She was influenced by works of artists from the CoBrA painting movement. Her work is also considered by some people, such as journalist Ahmed El Fassi, to be an example of naïve art.


Talal remains to be the only Moroccan painter to be listed on the stock market, as she had enthusiasts willing to invest over $100,000 for her work.