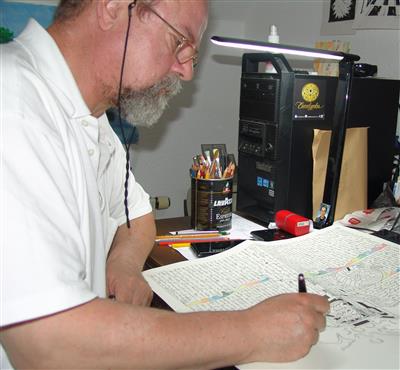 Armin Andreas Pangerl (born 13 May 1965 in Bayreuth) is a German painter, author and exhibition maker.


Pangerl was born 1965 as Son of police officer Anton Pangerl and his wife Monika. He has three Brother and grew up in Bayreuth, Lörrach und Lahr/Schwarzwald.


He lives and works in Lahr.


Armin Andreas Pangerl has been primarily self-taught in abstract painting since he was a child. In addition, since a stay in psychiatry, he has been painting conceptually and in the outsider art manner. Series and series of images are often created that are thematically the same. However, he rejects repetitions in his motifs except for the "one million project". So far, around 400,000 crosses (ink brushes) have been painted on 53 pictures. In addition to this main work, around 800 works on paper were created.
In addition, his sketches and drawings form a controversial universe of thoughts and transitions in the image formulations. The absurd has the same priority as the banal. Text passages and fragments of thought are often built into the form of associations to the painted that reflect the present. Another engine is music. Pangerl taught himself to play the guitar and piano at the age of 13, and there was an early ability to create his own compositions.


In 2017, some of his works were included in the Prinzhorn Collection in Heidelberg.


His texts are written in the first person perspective and convey an impression of the current inner state of mind.


Armin Andreas Pangerl is a founding member and honorary member of the association "Die Brücke e.V.Aidgroup for People in mental distress. He is also a member of Art-Transmitter.de and Insiderart.de as well Saatchi Art online and the European Outsider Art Association (EOA).