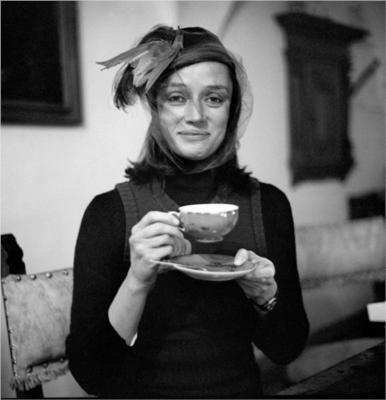 Niki de Saint Phalle (born Catherine-Marie-Agnès Fal de Saint Phalle, 29 October 1930 – 21 May 2002) was a French-American sculptor, painter, and filmmaker. She was one of the few women artists widely known for monumental sculpture, but also for her commitments.

She had a difficult and traumatic childhood and education, which she wrote about decades later. After an early marriage and two children, she began creating art in a naïve, experimental style. She first received worldwide attention for angry, violent assemblages which had been shot by firearms. These evolved into Nanas, light-hearted, whimsical, colorful, large-scale sculptures of animals, monsters, and female figures. Her most comprehensive work was the Tarot Garden, a large sculpture garden containing numerous works ranging up to house-sized creations. Her idiosyncratic style has been called "outsider art"; she had no formal training in art, but associated freely with many other contemporary artists, writers, and composers.

Throughout her creative career, she collaborated with other well-known artists such as Jasper Johns, Robert Rauschenberg, Larry Rivers, composer John Cage, and architect Mario Botta, as well as dozens of less-known artists and craftspersons. For several decades, she worked especially closely with Swiss kinetic artist Jean Tinguely, who also became her second husband. In her later years, she suffered from multiple chronic health problems attributed to repeated exposure to glass fibers and petrochemical fumes from the experimental materials she had used in her pioneering artworks, but she continued to create prolifically until the end of her life.

A critic has observed that Saint Phalle's "insistence on exuberance, emotion and sensuality, her pursuit of the figurative and her bold use of color have not endeared her to everyone in a minimalist age". She was well known in Europe, but her work was little-seen in the US, until her final years in San Diego. Another critic said: "The French-born, American-raised artist is one of the most significant female and feminist artists of the 20th century, and one of the few to receive recognition in the male-dominated art world during her lifetime".

Her birth was one year after Black Tuesday, and the French economy was also suffering in the aftermath of the infamous stock market crash that initiated the Great Depression. Within months of her birth, her father's finance company closed, and her parents moved with her oldest brother to the suburbs of New York City; she was left with her maternal grandparents in Nièvre, near the geographical center of France. Around 1933, she rejoined her parents in Greenwich, Connecticut; her father had found work as manager of the American branch of the Saint Phalle family's bank. In 1937, the family moved to East 88th Street in the affluent Upper East Side neighborhood of New York City. By this time, Marie-Agnès was known as "Niki," the name she would use from then on.