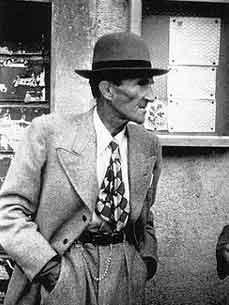 Soutter studied engineering in Lausanne, architecture in Geneva, violin in Brussels, and painting in Lausanne and in Paris. In Brussels he met Madge Fursman, a young American whom he married, after which he moved to the United States, where he gave drawing and violin lessons before becoming director of the Department of Fine Arts at Colorado College. Soutter became depressed and in 1902 returned to Switzerland, where he became a violinist in the orchestra of the Grand Théâtre de Genève and the Symphonic Orchestra of Lausanne. In 1922, he was institutionalized in the hospital of Eclagnens and later in the retirement home (Asile de Jura) in Ballaigues, where he would spend the rest of his life. In 1927, his cousin Le Corbusier became interested in his drawings and began supporting him.

He left "a remarkable body of work whose profound modernity has only recently come to light":