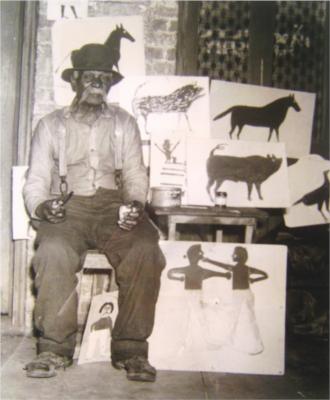 William "Bill" Traylor (1853–1949) was an African-American self-taught artist from Lowndes County, Alabama. Born into slavery, Traylor spent the majority of his life after emancipation as a sharecropper. It was only after 1939, following his move to Montgomery, Alabama that Traylor began to draw. At the age of 85, he took up a pencil and a scrap of cardboard to document his recollections and observations. From 1939 to 1942, while working on the sidewalks of Montgomery, Traylor produced nearly 1,500 pieces of art.

While Traylor received his first public exhibition in 1940, it wasn’t until the late 1970s, thirty years after his death, that his work finally began to receive broader attention. Recent acceptance of Traylor as a significant figure of American folk and modern art has been founded on the efforts of Charles Shannon, as well as the evolving tastes of the art world. Shannon, who first encountered Traylor’s work in 1940, brought Traylor to the attention of the larger art world. Since then, public and scholarly perception of Bill Traylor’s life and work has been in constant evolution. First held up as an example of "primitive" or "outsider" art, Traylor now holds a central position in the fields of "self-taught" and modern art.

For young Traylor, the mid-1860s marked a period of radical personal and economic change. In 1865, Traylor witnessed the Confederacy’s loss to the Union. This social and political rupture was compounded by the death of his father sometime between 1860 and 1866. While the end of the war ensured his legal emancipation, Traylor remained entrapped in the economic structures of the South's Jim Crow laws. He continued to work on the plantation, but now as a sharecropper.

While documenting the details of Traylor’s early life remains difficult, scholars have noted that Traylor fathered a number of children over his lifetime. In 1884, Traylor started a family with Larisa Dunklin (1872-). By 1887, they had had three children: George, Pauline, and Sally. By 1898, the couple had five more children: Rueben, Easter, Alice, Lillian, and an unnamed "child". In 1887, Traylor fathered Nettie from another relationship. Additionally, in the late 1890s, Traylor took a second wife, Laura Williams (1870-). The couple had five children: Clement, Will, Mack, John Henry, and Walter. In 1902, he had a son named Jimmie, with another woman. Later in life, Traylor was quoted as mentioning that "he raised twenty-odd children."

In 1909 Traylor was farming in Montgomery County and in 1928 Traylor left for the capital city of Montgomery. Explaining his moves,Traylor later remarked: "My white folks had died and my children had scattered." For 75-year-old Traylor, it would prove to be a challenging new beginning, but he rented a room and later a small shack and found work to support himself. Several years after the move, he found himself struggling to make ends meet. After rheumatism prevented him from continuing to work at a shoe factory, Traylor was forced out on to the streets. Receiving a small public assistance stipend, he entered into the ranks of the homeless. At night he slept the backroom of the Ross-Clayton Funeral Home. During the day, he camped out on Monroe Street. It was there, at the center of Montgomery’s African American community, that Traylor began his artistic career.