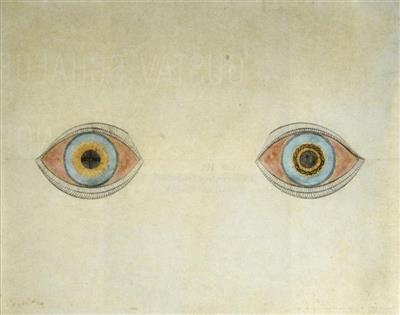 My Eyes in the Time of Apparition - August Natterer

August Natterer (1868–1933), also known as Neter, was a German outsider artist with schizophrenia.

August Natterer, given the pseudonym Neter by his psychiatrist to protect him and his family from the immense social stigma associated with mental illness at the time, was born in 1868 in Schornreute near Ravensburg, Germany, the son of a clerk and the youngest of nine children. Natterer studied engineering, got married, travelled widely, and had a successful career as an electrician but was suddenly stricken with delusions and anxiety attacks. On April Fool's Day 1907 he had a pivotal hallucination of the Last Judgment during which "10,000 images flashed by in half an hour." He described it as follows:

This ordeal led to a suicide attempt and committal to the first of what would be several mental asylums occupied during the remaining twenty-six years of his life. Natterer thereafter maintained that he was the illegitimate child of Emperor Napoleon I and "Redeemer of the World." The vision had inspired an intense production of drawings, all documenting images and ideas seen in the vision. He died in 1933 in an asylum near Rottweil.

Natterer was one of the "schizophrenic masters" profiled by Hans Prinzhorn in his field-defining work Artistry of the Mentally Ill. His drawings are attempts to capture the "10,000 images" of his April Fool's Day hallucination, and are always rendered in a clear, objective style, like that of a technical drawing. This may be due to his background as an electrician.

Natterer once claimed that Axle of the World, with Rabbit, which can be seen to the right, had predicted World War I. The rabbit represented "the uncertainty of good fortune. It began to run on the roller... the rabbit was then changed into a zebra (upper part striped) and then into a donkey (donkey's head) made of glass. A napkin was hung on the donkey; it was shaved."