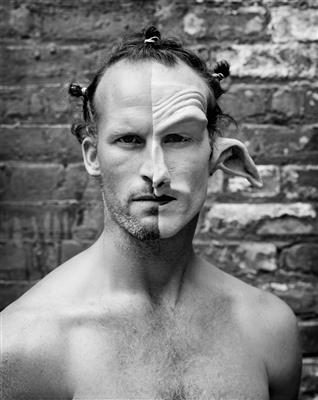 One of the most important figures in the contemporary art world, and known primarily for large-scale film projects, including his career-defining Cremaster Cycle (1994-2002), Barney has proved one of the most daring and ambitious American artists to gain fame from the late-twentieth-century onward. His works, which blend Video Art, Performance Art, and sculptural installations, are concerned with physical movement (sport and choreographed dance) and they carry deep thematic undercurrents of sexual and bodily excess. Barney's work, which provokes psychological fantasies that many find deeply challenging, is dense with references to training camps and medical apparatus, allusions to anatomical movement, the history of art, and the iconography, history, and mythology of ancient cultures. Barney is a strong advocate of collaboration (which he attributes to his early success in team sports), but the fact that he avoids self-publicity and unnecessary media attention (unlike Damien Hirst to whom he is sometimes compared) has added to his substantial cult following.

Barney's mother was Marsha Gibney, a painter specializing in what she called "biomorphic abstraction". The family lived in San Francisco until Matthew was seven years old and then moved to Boise, Idaho. During high school, Barney excelled at sports and made the wrestling and football teams. He recognized that his early involvement in team sports influenced the collaborative nature of his artistic practice. When Barney was twelve his parents divorced and his mother moved to New York City. Young Matthew made frequent trips to visit her there, and it was in New York that he developed an interest in the contemporary art scene.

In 1985, Barney attended Yale University on a football scholarship, with plans to study pre-med in lieu of a career as a plastic surgeon. After two semesters, he changed his major to art. His peers at Yale recognized his artistic talent and petitioned for him to be allowed to participate in the university's graduate art program while still an undergraduate. He created his earliest works while at Yale and exhibited his thesis project, a performance/installation titled Field Dressing (1989), in the university's Payne Whitney Athletic Complex. He selected the gymnasium, rather than a more conventional exhibition space, as it seemed better suited to his performance, which involved carrying out an athletic workout routine. With this work, he sought to explore concepts of physicality, fetishization, and endurance, in both sports and artistic practice.

After graduating from Yale in 1989, Barney moved to New York, where he used a studio space in Brooklyn for a short time. He then moved to a studio on Leroy Street in Greenwich Village, which he shared with sculptor Michael Rees (whom he had befriended while at Yale). Once in New York, Barney was recruited as a catalog model by the Click modeling agency (whose clients included Ralph Lauren and J. Crew), and he used the money he earned from modeling to finance his artistic pursuits. He remarked that ''When I was modeling, I found it interesting that you could step outside yourself and let yourself be used as a coat hanger or puppet, especially in the performance sense: to let your body be a tool, to leave the body in the work and not really to occupy your body when you are performing''.

Barney participated in several group shows at the Althea Viafora gallery in New York in 1990, and then presented his first solo show in 1991 at the Barbara Gladstone Gallery. As art critic Jerry Saltz recalls, the debut show presented Barney "in embryonic form yet with all the aspects of his art foreshadowed". The show featured sculptures (of athletic equipment like dumbbells and blocking tackles cast in wax, petroleum jelly, and tapioca), and various videos featuring Barney engaging in such performative actions as "pumping a hydraulic jack into his own abdomen," "[evacuating] his oral and anal cavities as pearls emerge from his mouth and rectum", and "being repeatedly attacked by a menacing football player".

Not unsurprisingly, Barney's show met with mixed reviews. The New York Times referred to it as "an extraordinary first show", for which visitors were seen lining up around the block. Other critics recognized the influence of boundary-pushing Performance artists like Vito Acconci and Chris Burden. Art critic Lane Relyea concluded that "Odds are Barney's never met a boundary he didn't want to violate; besides suspending, contorting, and poking himself, he's often shown crossdressing as well". Other critics, however, took offense at the gratuitousness of Barney's work, with Hilton Kramer writing in the New York Observer that "there is now almost nothing that someone won't do in public in the name of art, no matter how stupid or nasty", while John Haber called it "one of the silliest exhibitions in living memory".

In addition to his solo shows, Barney participated in several exhibitions and biennials in the United States and Europe throughout the 1990s. He said of his early success, "It felt like things were moving faster than I could keep up with. I was 24 and I didn't really understand what was going on. I made a conscious decision to take something on that I knew would slow everything down. That's how the Cremaster series came about". The art critic Sebastian Smee would later reflect that "Many hated the Cremaster extravaganza [but] if you were interested in contemporary art, you saw it, and the obligation to form a response suggested that something important had come into the world".

Around the turn of the century, Barney became romantically involved with Icelandic singer Björk and the couple lived for a time in a penthouse co-op in Brooklyn Heights. Björk once described her first encounter with Barney's work as "the closest thing to seeing my dreams" and the pair began collaborating. The couple had a daughter, Isadora, in 2002, and, three years later, they collaborated on Drawing Restraint 9, a feature-length film set abroad a Japanese whaling ship in which the singer acted, and for which she recorded a soundtrack. The couple separated in 2013 and there followed a difficult custody battle (Björk's 2015 album Vulnicura was inspired by the breakup, which she describes as "the most painful thing" she has ever experienced). For Barney, meanwhile, the breakup of their relationship roughly coincided with the release in 2014 (following a seven-year production period) of River of Fundament, a near six-hour film that took the form of a three-act opera with a score provided by Barney's longtime musical collaborator, Jonathan Bepler. It would prove to be Barney's most controversial work to date.

Since 2014, Barney has operated out of a studio in Long Island City, Queens. However, he remains passionate about the outdoors and enjoys camping in the Sawtooth Mountains in the summer months. He notes that the outdoors gives him a great deal of pleasure when he has the opportunity to bring his daughter along and to share with her the landscape in which he grew up. Around 2016, he even set up a second studio on a property he purchased in Idaho. Indeed, the wilderness of the Sawtooth mountains of Idaho would provide the setting for his project, Redoubt (2019).

Referred to by some as a "superstar", and a highly prominent artist of his generation, Barney remains a divisive figure within the contemporary art world. Having built his reputation as a performance artist, he has made film his primary medium. Indeed, he has been credited with "reinstating" film's role within contemporary art. Avant-gardists - ranging from Luis Buñuel to Man Ray; Jean Cocteau to Maya Deren; Nam June Paik to Andy Warhol - have pushed the boundaries of film experimentation and have helped pave the way for Video Art and other new media movements, but Barney's films, which incorporate performance, drawing, sculpture, still photography and choreographed performance, set a new standard in terms of budget, operatic scale and sheer ambition (not to mention questions of taste). Like no other artist before him, he has tested his audience in terms of the excessive duration of his works and objectionable imagery that would otherwise belong to the world of extreme pornography.

Whatever one's aesthetic or moral judgment, there can be no dispute that his work is uncompromising and impudent, and he has come closer than most to dismantling the barrier between popular culture and the rarefied world of the contemporary art scene. As the art critic Sebastian Smee summed up, "More than anyone else, Barney yanked video art out of the cul-de-sac it had created for itself. He reunited the medium with performance, sculpture, drawing, and architecture, and made it a natural vehicle for the most ambitious new art. In the process, his influence spread beyond art. It is hard to imagine, for instance, Lady Gaga's groundbreaking early videos (e.g. Bad Romance) without the macabre and queasy-making theatricality of Barney's Cremaster films".

Matthew Barney (born March 25, 1967) is an American contemporary artist and film director who works in the fields of sculpture, film, photography and drawing. His works explore connections among geography, biology, geology and mythology as well as themes of conflict and failure. His early pieces were sculptural installations combined with performance and video. Between 1994 and 2002, he created The Cremaster Cycle, a series of five films described by Jonathan Jones in The Guardian as "one of the most imaginative and brilliant achievements in the history of avant-garde cinema." He is also known for Drawing Restraint 9 (2005) and River of Fundament (2014), as well as his past relationship with Icelandic musician Björk.


Matthew Barney was born March 25, 1967, as the younger of two children in San Francisco, California, where he lived until he was 7. He lived in Boise, Idaho from 1973 to 1985, where his father got a job administering a catering service at Boise State University and where he attended elementary, middle, and high school. His parents divorced and his mother, an abstract painter, moved to New York City, where he would frequently visit. It was there where he was first introduced to the art scene.


Barney was recruited by Yale University in 1985 to play football and planned to go into pre-med, but he also intended to study art. In 1989, he graduated from Yale. His earliest works, created at Yale, were staged at the university's Payne Whitney Gymnasium. In the 1990s Barney moved to New York, where he worked as a catalog model, a career that helped him finance his early work as an artist. In 2002, Barney has a daughter with his then partner, the singer Björk, with whom he lived in a penthouse co-op in Brooklyn Heights. By September 2013, Barney and Björk were no longer a couple; Björk chronicled the breakup in her 2015 album Vulnicura.


The ongoing Drawing Restraint series began in 1987 as a series of studio experiments, drawing upon an athletic model of development in which growth occurs only through restraint: the muscle encounters resistance, becomes engorged and is broken down, and in healing becomes stronger. In literally restraining the body while attempting to make a drawing, Drawing Restraint 1–6 (1987–89) were documentations made using video and photography. Drawing Restraint 7 marks the influx of narrative and characterization, resulting in a three channel video and a series of drawings and photographs, for which Barney was awarded the Aperto Prize in the 1993 Venice Biennale.