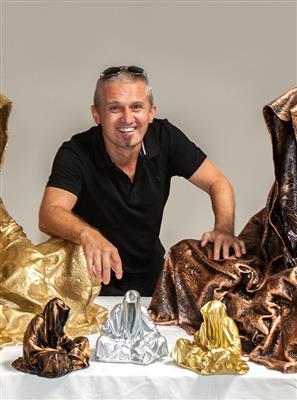 Manfred Kielnhofer was born in Haslach an der Mühl, Austria. He is self-taught and works with many different mediums; including, painting, film, photography, installation, performance and sculpture. His work usually concerns the human figure, and its different forms and movements, focusing mainly on the peculiarities of human nature. He uses the human form as a tool, either on a canvas or in a sculpture.

“Guardians of Time” relates to the idea that since the beginning of time mankind has had protectors, both for historic and mystical reasons. It seems that only man himself is a potential source of danger for his own existence. In his works of art Manfred Kielnhofer deals with the natural human desire for security. Thus his oeuvre reflects genuine exploration, consideration and discussion of current as well as historic moods and sensibilities of his social environment. His works of art captivate with elaborate combinations of light and different technique.

Manfred "KILI" Kielnhofer visited the technical College Linz where he took his final exam in 1995. he was engaged with technique and design and art on building lead him to his special way of art. Since 2000 he lives as a freelance artist in Linz. 2005 he launched Gallery Artpark in Linz.

Kielnhofer's most famous work is, "Guardians of Time“. Drawing on religious and supernatural phenomena, the Guardians of Time are stone statues that are cloaked in hooded robes and situated to seem like they are moving forth in some kind of ritual. In some cases the figures stand alone; in other instances, they are grouped together as if whispering to each other. Kielnhofer places his statues in public places like ancient castles, old mines, plazas, and parks. They are installed and moved without fanfare, heightening the eerie, mystic aura they give off. The first of these mysterious figures was created in 2006. Since then, Kielnhofer continues to create and install these statues all over the world. In 2012, the artist created the first of a new series of miniature guardians out of plastic.

In 2009, Kielnhofer developed a new sort of 'act photographs', which involves the construction of a waterplate in his studio, where he can take photos of models sitting or lying down, likely on a mirror.

In 2010 he developed the concept of the Light Art Biennale Austria 2010 with Martina Schettina.

The Interlux-Chair, Kielnhofers artwork shown at the biennial, was registered in the design-database of the MAK, the Museum for Applied Arts in Vienna.

In 2013 the first life-sized Guardian in bronze were cast at the art foundry Krismer.

In 2014 the large-scale sculptures 220x220x220cm guardians are shown by the Festival of Lights in Berlin.

In 2015 First works with the glass Berengo Studio Murano Venice.

A fine empty coat were made of white Carrara marble by Studio Massimo Galleni in 2016.

In 2017 the Bike Guardian rider - time traveler started the tour.