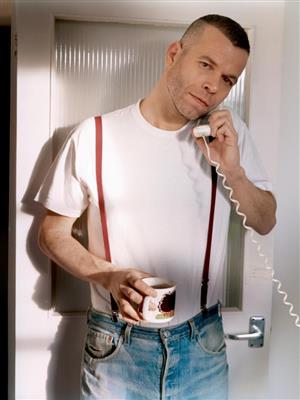 Wolfgang Tillmans (born 1968) is a German photographer. His diverse body of work is distinguished by observation of his surroundings and an ongoing investigation of the photographic medium’s foundations.

Tillmans was the first photographer – and also the first non-British person – to be awarded the Tate annual Turner Prize. He has also been awarded the Hasselblad Award, the Royal Photographic Society's Centenary Medal, the Royal Academy Summer Exhibition's Charles Wollaston Award, The Culture Prize of the German Society for Photography, and is a member of the Royal Academy of Arts. Tillmans lives in Berlin and London.

Wolfgang Tillmans was born on August 16, 1968 in Remscheid in the German area of Bergisches Land.

At the age of 14 to 16, visits to museums in Düsseldorf and to the Museum Ludwig in Cologne acquainted him with the photo-based art of Gerhard Richter, Sigmar Polke, Robert Rauschenberg and Andy Warhol, which counts among his earliest influences. During his first visit to England as an exchange student in 1983, he discovered the British youth culture and the local fashion and music magazines of the time. From 1987 to 1990, he lived in Hamburg; there, in 1988, he had his first solo exhibitions, at Café Gnosa, Fabrik-Foto-Forum, and Front. From 1990 through 1992, he studied at Bournemouth and Poole College of Art and Design in southern England. After his studies he moved to London and then to New York in 1994 for a year, where he met the German painter Jochen Klein. After moving back to England, Tillmans lived with Klein until Klein died of AIDS-related complications in 1997.

From 1995, Tillmans primarily lived and worked in London. During the summer of 1998, Tillmans participated in a month-long residency at the last active Shaker community in the world, in Sabbathday Lake, Maine. Since 2007, he has divided his time between Berlin and London. Following a guest professorship at the Hochschule für bildende Kunst in Hamburg from 1998 to 1999 and an Honorary Fellowship at the Arts University Bournemouth in 2001, Tillmans was a professor for Interdisciplinary Art at the Städelschule in Frankfurt am Main from 2003 to 2006.

In 2011, Tillmans travelled to Haiti with the charity Christian Aid to document reconstruction work after the country's devastating earthquake one year before.

Between 2009 and 2014 Tillmans served as an Artist Trustee of the Tate Board. He is also a member of the museum's Collection Committee and the Tate Britain Council. In 2017, he was elected to the Council of the Institute of Contemporary Arts (ICA).

Tillmans was initially known for his seemingly casual, sometimes snapshot-like portraits of friends (most notably, fashion designer Lutz Huelle and fellow artist Alexandra Bircken) and other youth in his immediate surroundings and scene. His photos – from the Europride in London (1992) or the Love Parade in Berlin (1992), for example – appeared in magazines such as i-D, Spex, Interview, SZ Magazin and Butt, and established his reputation as a prominent witness of a contemporary social movement. He was made co-editor of Spex in 1997. For the Index Magazine, he shot covers and assignments, including images of John Waters, Gilbert & George, and Udo Kier.