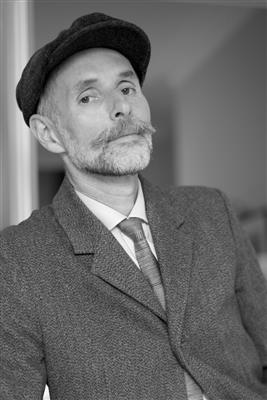 Glenn Brown (born 1966 in Hexham, Northumberland) is a British artist. He is known for the use of appropriation in his paintings. Starting with reproductions from other artists' works, Glenn Brown transforms the appropriated image by changing its colour, position, orientation, height and width relationship, mood and/or size. Despite these changes, he has occasionally been accused of plagiarism.

Brown lives and works in London and Suffolk, England. He was nominated for the Turner Prize in 2000. There was some controversy over his exhibition at Tate Britain for the Turner Prize, as one of the paintings was closely based on the science-fiction illustration "Double Star" produced in 1973 by the artist Tony Roberts.

Brown appropriates images by living, working artists, such as Frank Auerbach and Georg Baselitz, as well as paintings by historical artists, such as Guido Reni, Diego Velázquez, Anthony van Dyck, Rembrandt, Jean-Honoré Fragonard, Eugène Delacroix, John Martin, Gustave Courbet, Adolph Menzel, Pierre-Auguste Renoir, Vincent van Gogh, Chaim Soutine and Salvador Dalí. He claims that the references to these artists are not direct quotations, but alterations and combinations of several works by different artists, although the artists whose work is appropriated do not always agree. As art critic Michael Bracewell states, Brown is "less concerned with the art-historical status of those works he appropriates than with their ability to serve his purpose – namely his epic exploration of paint and painting." In most cases, the artist uses reproductions printed in exhibition catalogues, found on the internet or ordered through print-on-demand companies. By scanning and changing the image with programmes like Photoshop, Brown playfully alters the image to his specific needs. He distorts, stretches, pulls, turns the image upside down and changes the colour, usually based on other found images, as well as the background setting. Describing his working practice in an interview, Brown stated: "I‘m rather like a Dr Frankenstein, constructing paintings out of the residue or dead parts of other artist‘s work. I hope to create a sense of strangeness by bringing together examples of the way the best historic and modern-day artists have depicted their personal sense of the world. I see their worlds from multiple or schizophrenic perspectives, through all their eyes. Their sources of inspiration suggest things I would never normally see – rocks floating in far-off galaxies, for example, or a bowl of flowers in an 18th-century room, or a child in a fancy-dress costume. It‘s those fictions that I take as subject matter. The scenes may have been relatively normal to Rembrandt or Fragonard but because of the passage of time and the difference in culture, to me they are fantastical."