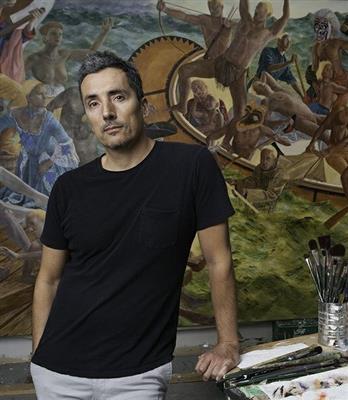 Kent Monkman (born 1965) is a Canadian First Nations artist of Cree ancestry. He is a member of the Fisher River band situated in Manitoba's Interlake Region. He is both a visual as well as performance artist, working in a variety of media such as painting, film/video, and installation.
He has had many solo exhibitions at museums and galleries in Canada, the United States, and Europe. He has achieved international recognition for his colourful and richly detailed combining of disparate genre conventions, and for his clever recasting of historical narrative.


Monkman was born in St. Marys, Ontario and raised primarily in Winnipeg, Manitoba. Monkman attended various Canadian and US institutions, including the Banff Centre, the Sundance Institute in Los Angeles, and the Canadian Screen Training Institute. He graduated from Oakville's Sheridan College in 1989 (Canadian Art). Monkman lives and works in Toronto, Ontario.


In 2017, Monkman was presented the Bonham Centre Award from The Mark S. Bonham Centre for Sexual Diversity Studies, University of Toronto, for his contributions to the advancement and education of issues around sexual identification. He also accepted the honorary title of grand marshal for Toronto's Pride parade that year, citing the importance of Canada's 150th anniversary and raising awareness to his work.


In response to Canada 150, curator of the University of Toronto art museum, Barbara Fischer, commissioned Monkman's exhibit, "Shame and Prejudice: A Story of Resilience". The exhibit combines physical artefacts from museums and archives across Canada with his painting style that engages with colonialism, aiming to "set up a provocative friction between Canadian national myths, aboriginal experience and traditional European art practices." The exhibit sought to bring the Indigenous experience into the conversation, looking also at what Canada's 150 years meant for Indigenous people.


In 2019, the Metropolitan Museum of Art commissioned two paintings from Monkman for its Great Hall, entitled "mistikôsiwak (Wooden Boat People)."


Monkman's work "convey[s] a deep understanding of oppression and the mechanisms at work in dominant ideology" by targeting modes of hierarchies and colonized sexuality within his artistic practice. Through his use of mimicry, Monkman subverts and de-centers the Western Gaze; he makes colonial audiences aware that "you've been looking at us [but] we've also been looking at you".
In his paintings and performances he appropriates classical 19th-century landscapes, speaking to the appropriation and assimilation of Indigenous culture by colonial settlers. He targets both the Indigenous communities and Euro-American communities affected by colonialism, generally playing with role reversal to do so. Some of the binary topics he tackles are "artist and model, colonial explorer and colonized subject, gazer and gazed upon, male and female, straight and queer, past and present, real and imaginary".