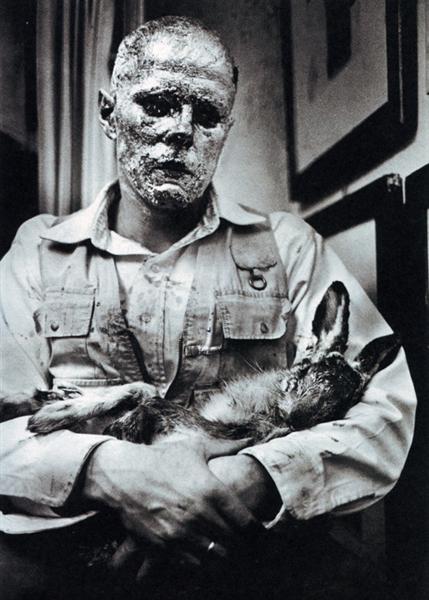 How to Explain Pictures to a Dead Hare, 1965 - Joseph Beuys

Performance art is a performance presented to an audience within a fine art context, traditionally interdisciplinary. Performance may be either scripted or unscripted, random or carefully orchestrated; spontaneous or otherwise carefully planned with or without audience participation. The performance can be live or via media; the performer can be present or absent. It can be any situation that involves four basic elements: time, space, the performer's body, or presence in a medium, and a relationship between performer and audience. Performance art can happen anywhere, in any type of venue or setting and for any length of time. The actions of an individual or a group at a particular place and in a particular time constitute the work.

Performance art is an essentially contested concept: any single definition of it implies the recognition of rival uses. As concepts like "democracy" or "art", it implies productive disagreement with itself.

The meaning of the term in the narrower sense is related to postmodernist traditions in Western culture. From about the mid-1960s into the 1970s, often derived from concepts of visual art, with respect to Antonin Artaud, Dada, the Situationists, Fluxus, installation art and conceptual art, performance art tended to be defined as an antithesis to theatre, challenging orthodox art forms and cultural norms. The ideal had been an ephemeral and authentic experience for performer and audience in an event that could not be repeated, captured or purchased. The widely discussed difference, how concepts of visual arts and concepts of performing arts are utilized, can determine the meanings of a performance art presentation.

Performance art is a term usually reserved to refer to a conceptual art which conveys a content-based meaning in a more drama-related sense, rather than being simple performance for its own sake for entertainment purposes. It largely refers to a performance presented to an audience, but which does not seek to present a conventional theatrical play or a formal linear narrative, or which alternately does not seek to depict a set of fictitious characters in formal scripted interactions. It therefore can include action or spoken word as a communication between the artist and audience, or even ignore expectations of an audience, rather than following a script written beforehand.

Some kinds of performance art nevertheless can be close to performing arts. Such performance may utilize a script or create a fictitious dramatic setting, but still constitute performance art in that it does not seek to follow the usual dramatic norm of creating a fictitious setting with a linear script which follows conventional real-world dynamics; rather, it would intentionally seek to satirize or to transcend the usual real-world dynamics which are used in conventional theatrical plays.

Performance artists often challenge the audience to think in new and unconventional ways, break conventions of traditional arts, and break down conventional ideas about "what art is". As long as the performer does not become a player who repeats a role, performance art can include satirical elements (compare Blue Man Group); utilize robots and machines as performers, as in pieces of the Survival Research Laboratories; involve ritualised elements (e.g. Shaun Caton); or borrow elements of any performing arts such as dance, music, and circus.