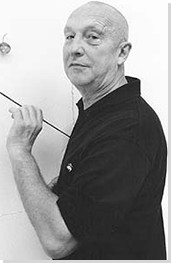 Georg Baselitz was enormously influential in showing a generation of German artists how they might come to terms with issues of art and national identity in the wake of the Second World War. Briefly trained in the officially sanctioned social realism of Communist East Berlin, he soon moved to West Berlin, and encountered abstract art. Ultimately, however, he was to reject both options. While others turned to Conceptual art, Pop, and Arte Povera, Baselitz revived the German Expressionism that had been denounced by the Nazis, and returned the human figure to a central position in painting. Controversial when he first emerged in 1963, and controversial again nearly two decades later when he began to produce sculpture, Baselitz inspired a revival of Neo-Expressionist painting in Germany in the 1970s, and his example gave encouragement to many more who took up similar styles both in Europe and the United States in the 1980s.

Georg Baselitz (born 23 January 1938, as Hans-Georg Kern, in Deutschbaselitz, Germany) is a German painter, sculptor and graphic artist. In the 1960s he became well known for his figurative, expressive paintings. Since 1969, he paints his subjects upside down in an effort to overcome the representational, content-driven character of his earlier work and stress the artifice of painting. Drawing from a myriad of influences, including art of Soviet era illustration art, the Mannerist period and African sculptures, he developed his own, distinct artistic language.

Since Baselitz grew up amongst the suffering and demolition of World War II, the concept of destruction plays a significant role in his life and work. These autobiographical circumstances have therefore returned throughout his whole oeuvre. In this context, the artist stated in an interview: "I was born into a destroyed order, a destroyed landscape, a destroyed people, a destroyed society. And I didn't want to reestablish an order: I had seen enough of so-called order. I was forced to question everything, to be 'naive', to start again." By disrupting any given orders and breaking the common conventions of perception, Baselitz has formed his personal circumstances into his guiding artistic principles. To this day, he still inverts all his paintings, which has become his unique and most defining feature in his work.

Baselitz was born on 23 January 1938, in Deutschbaselitz (now a part of Kamenz, Saxony), in what was later East Germany. His father was an elementary-school teacher and the family lived in the local school building.Baselitz attended the local school in Kamenz. In its assembly hall hung a reproduction of the painting Wermsdorfer Wald (1859) by Louis-Ferdinand von Rayski, an artist whose grasp of Realism was a formative influence on Baselitz. Moreover, Baselitz was interested the writings of Jakob Böhme. At the ages of 14 and 15, he already painted portraits, religious subjects, still lifes and landscapes, some in a futuristic style.

In 1955, he applied to study at the Kunstakademie in Dresden but was rejected. In 1956, he successfully enrolled at Hochschule für Bildende und Angewandte Kunst in East Berlin. There he studied under professors Walter Womacka and Herbert Behrens-Hangler, and befriended Peter Graf and Ralf Winkler (later known as A. R. Penck). After two semesters however, he was expelled for "sociopolitical immaturity" because he did not comply with the socialist ideas of the DDR. Baselitz' distinic and controversial nature already becomes apparent this early on in his career.

In 1957, he resumed his studies at Hochschule der Künste in West Berlin, where he settled down and met his future wife Johanna Elke Kretzschmar. In 1961, he attended Hann Trier's master class and completed his studies the following year. Hann Trier's classes were described as a creative environment largely dominated by the gestural abstraction of Tachism and Art Informel. At the Hochschule der Künste Baselitz immersed himself in the theories of Ernst Wilhelm Nay, Wassily Kandinsky and Kasimir Malevich. During this time he became friends with Eugen Schönebeck and Benjamin Katz. Art historian Andreas Franzke describes Baselitz primary artistic influences at this time as Jackson Pollock and Philip Guston.