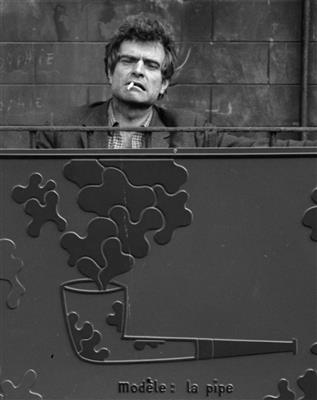 Marcel Broodthaers' meteoric rise to the top of the art world upon his entrance onto the scene in 1964 - coupled with his brilliant output until his untimely death twelve years later - makes one wonder why he waited until age 40 to begin his artistic career. On the other hand, Broodthaers' work explores irony, contradiction, and the questioning of long-established artistic institutions, so it may be fitting that his artistic fame constituted a 180-degree turnaround from a 20-year period spent in poverty as a poet and journalist. Broodthaers' engagement with language, history, and identity helped establish Conceptual Art and fought to free visual art from the shackles of aesthetic taste and commercialization.

Marcel Broodthaers was born in Brussels in 1924. As a youth, he was known to be bright and academically-inclined. From a relatively early age, Broodthaers was involved in political and social issues. Around the age of 16, he was introduced to the Surréalisme Revolutionnaire, a branch of the surrealists in Belgium, and during World War II he joined the anti-Nazi resistance.

Broodthaers worked as a poet from the age of 20 until the age of 40. Between 1943 and 1951 he was a member of the Communist party, and his written works discussed the ways in which creativity and cultural expression could influence society. In 1945, Broodthaers befriended René Magritte, whose exploration of the boundaries and meaning of language greatly influenced him. That same year his poetry first appeared in print, though he did not release an entire volume of poetry until Mon Livre d'Ogre was published in 1957.

Broodthaers did not receive popular or critical success for his writings, and lived in poverty during his 20s and 30s, supporting himself as a journalist and bookseller. His class consciousness would inspire much of his later visual work that explores a sense of Belgian national identity as intertwined with themes of power and establishment. This theme would pervade so much of Broodthaers' work that Magritte once asked him, "Come to think of it, Broodthaers, aren't you more a sociologist?"

In the 1950s Broodthaers, whose work in journalism had included photography, also began experimenting with film, creating his homage to Kurt Schwitters, La Clef de l'Horloge, un poème cinématographique (1957). While working as a docent at the Palais des Beaux-Arts In Brussels in February 1962 he famously met the conceptual artist Piero Manzoni, who was exhibiting there at the Galerie d'Aujourd'hui, where the Italian declared Broodthaers to be a "Living Sculpture" and signed a certificate of authenticity to that effect. Later that year Broodthaers moved to Paris before returning to Brussels in 1963 and starting to produce visual art.

Broodthaers began sculpting in 1964, only twelve years before he ultimately died at age 52. In some ways, this meant his artistic practice began at a period of maturity in his life that allowed him to reflect on both his experiences as a poet and his Belgian identity. Broodthaers was inspired to turn to visual arts in part due to the changing notion of the art object in the 1950s and '60s, which may have been advantageous for someone like him who had no formal art training and might be predisposed to consider art in more unorthodox ways. Broodthaers noticed how Pop art often made use of humor and word play and saw in it a potentially lucrative opportunity for his creativity with words.

Broodthaers' art quickly found critical acclaim, and his output during those years was staggering. He produced over 50 different films between 1967 and his death in 1976, and in the twelve-year career, he staged some 70 one-man exhibitions. His first solo show was in 1964 at Galerie St. Laurent in Brussels, where he unveiled his first piece, Pense-Bête (Memory Aid), a work that encased the unsold copies of his final volume of poetry of the same name in plaster. At this time, he also started using mussels and other found objects. Mussels, one of the most common Belgian dishes, and other organic detritus, such as eggshells, became ways to represent both Belgian identity and the passage of time and memory. His use of materials would go on to include objects like worked metal and plastic signs, as well as discarded clothing and art. The themes of memory and the difficulty of preservation pervades every medium of Broodthaers' work, from installation to painting to readymade object.

1968 was a tumultuous year in Europe, with revolts by students in Paris in May that soon developed into a general strike; these protests also spread north to Brussels. There, a group of students and artists occupied the Palais des Beaux-Arts, and briefly, Broodthaers served as their spokesperson, challenging the control that the museum exerted on the artists whose work was displayed inside. But he quickly dissociated himself from the occupiers, realizing that all art is inextricably linked with commercial value. Instead, he soon afterward sought to make his home and studio a gathering place for intellectuals, artists, and critics to discuss the state of European art and politics. This provided the impetus for what would be one of his most famous works, the Musée d'Art Moderne (1968), as these meetings were reputedly held under a sign in his apartment for the "section of eagles" - eagles being a preferred symbol of power and strength used by organized institutions and the state. The "Department of Eagles" was also, initially, the only division of his house-museum - its contents were all related in one way or another to the imagery of the bird.

The "museum" also took on different "exhibitions" and sections to directly call into question the role and function of museums and institutions, and, by extension, confronted the possibility of recontextualizing art and the art object. For example, one of the first versions, Musée d'Art Moderne: Documentary Section (1969), consisted of a traced-out museum floor plan on a beach.

Occasionally Broodthaers would pose for public stunts. In 1974, for example, he appeared in front of the Palais des Beaux-Arts in Brussels with the camel from the Antwerp Zoo and its two handlers.

In 1970 Broodthaers left Belgium for Germany, living in Düsseldorf for a couple of years before moving to London briefly in 1973. Broodthaers then returned to Germany, this time to Berlin, for an artist exchange program, in which he had an impressive six solo shows during 1974 and late 1975. Broodthaers died on his 52nd birthday in January 1976 in Cologne, after a battle with liver disease. He rests in a cemetery in Brussels under a tombstone that he designed.

Broodthaers' legacy can be seen in the many postmodern installations and conceptual pieces that continue to pervade the contemporary art scene, as well as in the experiential art that takes the viewing experience to an interactive level. For example, it goes without saying that the Young British Artists generation is in some ways incredibly influenced by Broodthaers' work. Tracey Emin's installations, including My Bed (1998), echo Broodthaers' La Salle Blanche (1975) in terms of recreating an artist's lived experience, and her neon signs both use fabrication processes and language to impart meaning to the viewer. The staging of objects to create meaning can also be seen in the work of Damien Hirst. Even in the works of the American artist Matthew Barney, the idea of exploring themes of experience and humanity in almost surreal scenery can be traced back to Broodthaers.

His open-ended edition of gold ingots can be almost directly seen in the works of contemporary conceptual artist Danh Vo, who uses gold bars and gilding to comment on his own experiences with his nationality and the influence of his family. Also, Broodthaers' use of text as visual language can be seen in the works of Ed Ruscha, and his fabrication processes have similarities in the work of artists like John Baldessari, who employed sign-painters for some of their works, similar to the way that Broodthaers did.

Marcel Broodthaers (28 January 1924 – 28 January 1976) was a Belgian poet, filmmaker and artist with a highly literate and often witty approach to creating art works.

Broodthaers was born in Brussels, Belgium, where he was associated with the Groupe Surréaliste-revolutionnaire from 1945 and dabbled in journalism, film, and poetry. After spending 20 years in poverty as a struggling poet, at the end of 1963 he decided to become an artist and began to make objects. He performed the symbolic act of embedding fifty unsold copies of his book of poems Pense-Bête in plaster, creating his first art object. That same year, 1964, for his first exhibition, he wrote a famous preface for the exhibition catalogue;

Broodthaers made his first film in 1957, and from 1967 he produced over 50 short films in documentary, narrative, and experimental styles.

Broodthaers later worked principally with assemblies of found objects and collage, often containing written texts. He incorporated written language in his art and used whatever was at hand for his raw materials—most notably the shells of eggs and mussels, but also furniture, clothing, garden tools, household gadgets and reproductions of artworks. In his Visual Tower (1966), Broodthaers made a seven-story circular tower of wood. He filled each story with uniform glass jars, and in every jar he placed an identical image taken from an illustrated magazine, of the eye of a beautiful young woman. For Surface de moules (avec sac) (Surface of mussels (with bag)) (1966), he glued mussels in resin on a square panel; in 1974 the artist added a discreet metal hook to the centre of the work designed to support a shopping bag filled with mussel shells.

From 1968 to 1975 Broodthaers produced large-scale environmental pieces that reworked the very notion of the museum. His most noted work was an installation which began in his Brussels house which he called Musée d'Art Moderne, Départment des Aigles (1968), containing different representations of eagles in glass cases that were accompanied by signs that asserted "This is not a work of art", implying that museums obscure the ideological functioning of images by imposing illegitimate classifications of value. This installation was followed by a further eleven manifestations of the 'museum', including at the Kunsthalle Düsseldorf for an exhibition in 1970 and at documenta 5 in Kassel in 1972. In 1970 Broodthaers conceived of the Financial Section, which encompassed an attempt to sell the museum "on account of bankruptcy." The sale was announced on the cover of the Art Cologne fair catalogue in 1971, but no buyers were found. As part of the Financial Section, the artist also produced an unlimited edition of gold ingots stamped with the museum's emblem, an eagle, a symbol associated with power and victory. The ingots were sold to raise money for the museum, at a price calculated by doubling the market value of gold, the surcharge representing the bar's value as art. In 1974, Broodthaers launched three separate exhibitions in the same week, each consisting of a new type of installation artwork he referred to as “décors.” The venues of these exhibitions were Wide White Space in Antwerp, Catalogue-Catalogus at Palais de Beaux-Arts Brussels, and Eloge du sujet at Kunstmuseum Basel. In 1975 Broodthaers presented the exhibition "L’Angelus de Daumier" at the Centre National d’Art Contemporain in Paris, at which each room had the name of a colour. In La Salle Blanche (The White Room) (1975), a life-size copy of a room and a half in Broodthaers' home in Brussels, the wooden walls of the empty, unfurnished rooms are covered with printed words in French—such as museum, gallery, oil, subject, composition, images, and privilege—all intended to examine "the influence of language on perceptions of the world and the ways museums affect the production and consumption of art." For such works he is associated with the late 20th century global spread of both installation art as well as "institutional critique," in which interrelationships between artworks, the artist, and the museum are a focus. Indeed, Broodthaers' Musée d'Art Moderne, his "first fictional museum," allowed him to simultaneously posture as artist, director, curator and trustee in a self-reflexive examination of the order and prescriptions implicit in the production of museum exhibits.