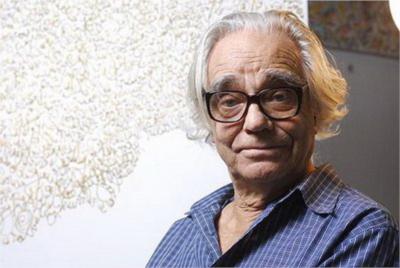 Ferrari was born in Buenos Aires to Susana Celia del Pardo and Augusto César Ferrari; his father was a well-known painter from San Possidonio, Italy. The younger Ferrari went on to employ methods such as collage, photocopying and sculpture in wood, plaster or ceramics. He often used text, particularly newspaper clippings or poetry, in his pieces. His art often dealt with the subject of power and religion; images or statues of the saints, the Virgin Mary or Jesus may be found in cages, sinks, meat blenders or frying pans. He has also dealt with issues of United States foreign policy; in his best-known work, La civilización occidental y cristiana ("Western-Christian Civilization", 1965), Christ appears crucified on a fighter plane, as a symbolic protest against the Vietnam War ([1]).

Ferrari also wrote many articles for left-leaning newspaper Página 12. His work and his politics brought him much controversy and notoriety. He was forced into exile in São Paulo, Brazil from 1976 to 1991 following threats by the military dictatorship, which "disappeared" his son Ariel in 1977. He returned to Argentina in 1991.

His work was again the subject of controversy when in 2004, a retrospective of his works at the Palais de Glace exhibition hall in Recoleta, Buenos Aires, was forced to close following intervention by Pope Francis (then Archbishop of Buenos Aires) and a subsequent court order. Protests and government action allowed the exhibition to reopen.

In 2009 the Museum of Modern Art in New York City featured his work in a major exhibition with artist Mira Schendel called Tangled Alphabets. His work was also exhibited at the Rencontres d'Arles Festival, in Arles, France.

He earned among many other awards and recognitions the São Paulo Association of Art Critics Award for Best Art Exhibition of 1983, a Guggenheim Fellowship in 1995, the Leone D'Oro at the Venice Biennale in 2007, and in 2012 Konex Foundation in Argentina granted him the Diamond Konex Award for Visual Arts as the most important artist in the last decade in his country.