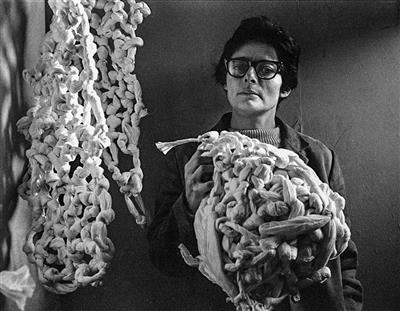 Mira Schendel is considered "one of the most significant and influential Brazilian artists of the twentieth century". While having contributed to the Concretist and Neoconcretist movements that stormed the Brazilian avant-garde, she was never associated with a single movement. Her works also contain elements of Lettrism, Color Field painting, (proto)minimalism and early conceptual art. After her death, an entire room of her works was featured on the 22nd International São Paulo Biennale and, in 2009, the Museum of Modern Art from New York has dedicated a retrospective exhibition to Mira Schendel and León Ferrari.

Mira Schendel (June 7, 1919 – July 24, 1988) was a Brazilian contemporary artist of the 20th century. She made numerous drawings on rice paper, but was also active as a painter, a poet, and a sculptor.

Mira Schendel was born Myrrha Dagmar Dub in 1919 in Zurich, Switzerland. Her father, Karl Leo Dub, was a fabric merchant, and her mother, Ada Saveria Büttner, was a milliner. Although she had Jewish heritage, Schendel was baptized at her mother's request at the Kirche St. Peter and Paul, a Catholic church in Zurich, on October 20, 1920 and was raised as a Roman Catholic. Schendel's parents divorced in September 1922, and her mother married Count Tommaso Gnoli in 1937. In the late 1930s, Schendel began to study philosophy at the Universita Cattolica del Sacro Cuore in Milan. Because of racial laws introduced in Fascist Italy in 1938, she was designated as Jewish, stripped of her Italian citizenship and forced to leave university, and so decided to flee Italy in 1939. After travelling through Switzerland and Austria, she joined a group of refugees heading to Sarajevo. After spending the war in Sarajevo, she returned to Italy, with her first husband Josep Hargesheimer, and worked for the International Refugee Organisation in Rome. Having applied to various countries in the Americas, in 1949 she emigrated and settled with Josep in Brazil.

When she arrived in São Paulo in 1953, Brazilian modernism was dominated by a debate between figuration and abstraction. During the 1930s and 1940s figurative 'modernismo' had been dominant, but in the late 1940s and early 1950s abstract-geometric art began to be shown in Brazil and led to the founding of the Concrete art movement Ruptura in 1952. In São Paulo, an immigrant city that was industrial and undergoing rapid growth, Schendel found a circle of emigre intellectuals from different disciplines with whom she could discuss ideas about aesthetics and philosophy; this included the Czech-born philosopher Vilem Flusser, the physicist Mário Schenberg and the psychoanalyst Theon Spanudis among others. She became a prolific modernist painter and sculptor. She used paint with talc and brick dust, and made many drawings on rice paper. According to Laura Cumming her art has its sources in phenomenology, in the idea of being and nothingness, in mystical thinking and her deep reading of Wittgenstein. But the impact of these works does not depend upon the viewer sharing either that knowledge or those interests.

In the early 1960s, Schendel received a gift of rice paper from Mário Schenberg and in 1964 began to use this to make monotype drawings. She worked rapidly and in little over a year she had made the majority of approximately 2,000 drawings. In these works she also first combined multiple languages, using words and phrases from her principle spoken languages - Italian, German and Portuguese but also adding words in French, English, Croat and Czech. One important group of monotypes was inspired by Karlheinz Stockhausen's Gesang der Jünglinge (1955–1956), an early piece of electronic music that employed vocals drawn from the biblical Book of Daniel. A number of these were included in the 1965 São Paulo Bienal.