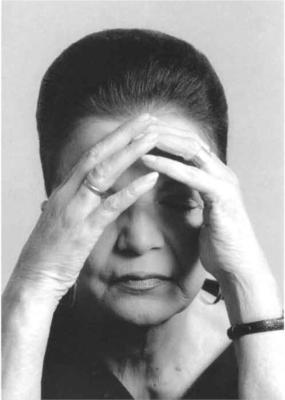 Lygia Clark (Belo Horizonte, October 23, 1920 – Rio de Janeiro, April 25, 1988) was a Brazilian artist best known for her painting and installation work. She was often associated with the Brazilian Constructivist movements of the mid-20th century and the Tropicalia movement. Along with Brazilian artists Amilcar de Castro, Franz Weissmann, Lygia Pape and poet Ferreira Gullar, Clark co-founded the Neo-Concrete movement. The Neo-Concretists believed that art should be subjective and organic. Throughout her career, Clark discovered ways for museum goers (who would later be referred to as "participants") to interact with her art works. She sought to redefine the relationship between art and society. Clark's works dealt with inner life and feelings.

In 1920, Lygia Clark was born in Belo Horizonte, Minas Gerais Brazil. Clark became an artist in 1947. In this year, she moved to Rio de Janeiro to study with Brazilian landscape architect Roberto Burle Marx. Between 1950 and 1952, she studied with Isaac Dobrinsky, Fernand Léger and Arpad Szenes in Paris. In 1953, she became one of the founding members of Rio's Frente group of artists. In 1957, Clark participated in Rio de Janeiro's first National Concrete Art Exhibition. This would be one of Clark's frequent trips to Brazil in order to exhibit her artwork.

In the first decade of her career, Clark devoted her time to painting and sculpture. After 1966, Clark claimed to have abandoned art. In the early 1970s, she taught art at the Sorbonne. During this time, Clark also explored the idea of sensory perception through her art. Her art became a multisensory experience in which the spectator became an active participant. Between 1979 and 1988, Clark moved more toward art therapy than actually creating new works. She used her art therapy to treat psychotic and mildly disturbed patients. Clark returned to Rio de Janeiro, Brazil in 1977. In 1988, she died of a heart attack in her home.

Some critics say her artwork presaged the modern digital information era. Her later works were more abstract and holistic with a focus on psychotherapy and healing.

Lygia Clark is one of the most established artists associated with the Tropicália movement. Clark explored the role of sensory perception and psychic interaction that participants would have with her artwork. An example of Clark's fascination with human interaction is her 1967 piece O eu e o tu (The I and the You). The piece consists of two industrial rubber suits joined together by an umbilical-like cord. The participants wearing the suits would be joined together but unable to see one another, forming an almost psycho-sexual bond between the two. Clark said of her pieces, "What's important is the act of doing in the present; the artist is dissolved into the world."

In 1964, Clark began her Nostalgia of the Body series with the intention of abandoning the production of art objects in order to create art that was rooted in the senses. The Nostalgia of the Body works relied on participant's individual experiences occurring directly in their bodies. These pieces addressed the simultaneous existence of opposites within the same space: internal and external, metaphorical and literal, male and female.