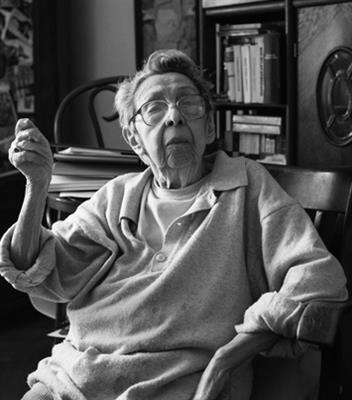 Geta Brătescu (born 4 May 1926, Ploiești) is a Romanian visual artist.

In 2008 Geta Brătescu received the title of Doctor honoris causa from the National University of Arts Bucharest, awarded for her outstanding contribution to the development of contemporary Romanian art. Brătescu is also artistic director of the magazine of literature and art Secolul 21. A major retrospective of her work was held at the National Museum of Art of Romania in December 1999. In 2015 Brătescu's first UK solo exhibition was held at Tate Liverpool. In 2017, she was selected to represent Romania at the 57th Venice Biennale.

Geta Brătescu studied at the Faculty of Letters, University of Bucharest, between 1945 – 1949, under George Călinescu and Tudor Vianu, and at the Academy of Fine Arts under Camil Ressu. She was expelled from the latter before completing her degree due to the rise of the Communist party - since her parents owned property, she was deemed 'of bad origins'. In 1969 she was able to return to university, and studied at the Institute of Fine Arts "Nicolae Grigorescu", now Bucharest National University of Arts between 1969 – 1971. She also studied literature alongside her art studies, and a close relationship between art and writing is present in much of her work.

Following exclusion from her fine art course, Brătescu worked as an arts editor, illustrator and animator, and also carried out documentation trips both in Romania and abroad for the Artist's Union. Once she returned to university, as a fine art student she had access to a studio which became the subject of a series of works throughout the 1970s that looked at the studio as a place to redefine the self. In perhaps her most famous film, The Studio (1978), made with Ion Grigorescu in a new studio at the Artist's Union, she measures her size in the space, marking her place in the world.

Other works from this period raise questions of self-identity and dematerialisation such as the performance and photography work Towards White. In the 1980s Brătescu began working with textiles, describing this practice as 'drawing with a sewing machine'.

Brătescu has been interested in numerous literary figures, including Aesop, Faust and Medea. The latter, a somewhat anti-feminine figure who killed her children, was the subject of a series of textile works made using scraps of cloth given to Brătescu by her mother, reflecting Brătescu's complex relationship with feminism. Throughout Brătescu's works the line is a dominant feature, functioning as a mode of definition, measurement and movement, from the classical draughtsmanship of Hands 1974–76 to the body performing in space in The Studio 1978. Creating lines through material has continued within Brătescu's practice to present day within the series of collages Jeu des Formes (Game of Forms) 2009 – ongoing.

In 2017, Romania's Culture Ministry selected the 90-year old Geta Brătescu to represent Romania at the 57th Venice Biennale in 2017. She will present a piece of work entitled Geta Brătescu — Appearances, although she has participated in the Biennale twice before – in 1960, as part of a group exhibition and again in 2013 at the Central Pavilion, alongside fellow Romanian artists Ștefan Bertalan and Andra Ursuta.