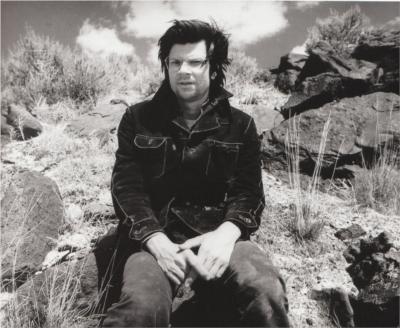 Robert Smithson (January 2, 1938 – July 20, 1973) was an American artist who used photography in relation to sculpture and land art.

Smithson was born in Passaic, New Jersey and early on lived mostly in Rutherford. In Rutherford, William Carlos Williams was Smithson's pediatrician. When Smithson was nine his family moved to the Allwood section of Clifton. He studied painting and drawing in New York City at the Art Students League of New York from 1955 to 1956 and then briefly at the Brooklyn Museum School.

His early exhibited artworks were collage works influenced by "homoerotic drawings and clippings from beefcake magazines", science fiction, and early Pop Art. He primarily identified himself as a painter during this time, but after a three-year rest from the art world, Smithson emerged in 1964 as a proponent of the emerging minimalist movement. His new work abandoned the preoccupation with the body that had been common in his earlier work. Instead he began to use glass sheet and neon lighting tubes to explore visual refraction and mirroring, in particular the sculpture Enantiomorphic Chambers. Crystalline structures and the concept of entropy became of particular interest to him, and informed a number of sculptures completed during this period, including Alogon 2. In Smithson’s eyes entropy was the second law of thermodynamics, which exploits the range of energy by telling us that energy is easier lost than obtained. He said that in the ultimate future the universe will burn out into an all encompassing sameness. Smithson used the idea of entropy to explore ideas of decay and renewal, chaos and order, non-sites and earthworks, trying to find equilibrium between these opposites. His ideas on entropy also branched out into culture, “the urban sprawl and the infinite number of housing developments of the post war boom have contributed to the architect of entropy”. Smithson did not see entropy as a disadvantage; he saw it as a form of transformation of society and culture, which is shown in his artwork like his non-site pieces. Smithson became affiliated with artists who were identified with the minimalist or Primary Structures movement, such as Nancy Holt (whom he married), Robert Morris and Sol LeWitt. As a writer, Smithson was interested in applying mathematical impersonality to art that he outlined in essays and reviews for Arts Magazine and Artforum and for a period was better known as a critic than as an artist. Some of Smithson's later writings recovered 18th- and 19th-century conceptions of landscape architecture which influenced the pivotal earthwork explorations which characterized his later work. He eventually joined the Dwan Gallery, whose owner Virginia Dwan was an enthusiastic supporter of his work.

In 1967 Smithson began exploring industrial areas around New Jersey and was fascinated by the sight of dump trucks excavating tons of earth and rock that he described in an essay as the equivalents of the monuments of antiquity. This resulted in the series of 'non-sites' in which earth and rocks collected from a specific area are installed in the gallery as sculptures, often combined with mirrors or glass. In September 1968, Smithson published the essay "A Sedimentation of the Mind: Earth Projects" in Artforum that promoted the work of the first wave of land art artists, and in 1969 he began producing land art pieces to further explore concepts gained from his readings of William S. Burroughs, J.G. Ballard, and George Kubler.