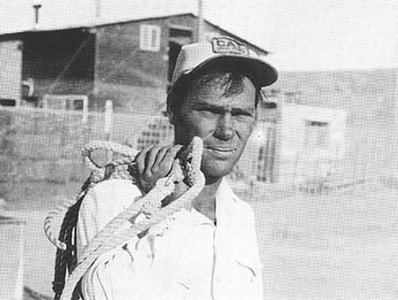 Michael Heizer (born 1944) is a contemporary artist specializing in large-scale and site-specific sculptures. Working largely outside the confines of the traditional art spaces of galleries and museums, Heizer has redefined sculpture in terms of size, mass, gesture, and process. A pioneer of Land Art, he is renowned for awe-inspiring sculptures and earthworks made with earth-moving equipment, which he began creating in the American West in 1967. He currently lives and works in Hiko, Nevada and New York City.

Heizer began his artistic career in New York in 1966 with a series of geometric canvases painted with PVA latex. The paintings that would follow, characterized by non-traditionally shaped shaped canvases, demonstrate Heizer's early exploration of positive and negative forms; such harmonies of presence and absence, matter and space, are essential to his art. In Trapezoid Painting (1966) and Track Painting (1967), he emphasizes the perimeters of raw canvases by painting them black, while the white interiors are perceived as negative spaces. These hard-edged “displacement paintings” parallel the immense geometries he achieves when moving earth. The slate grey contours of U Painting (1975), for example, anticipate the shapes of the depressions and angular mounds that appear in his forthcoming project "City".

In the late 1960s, Heizer left New York City for the deserts of California and Nevada, where he began making his first "negative" sculptures. These works were created by removing earth to shape subterranean negative forms directly into desert floor. Completed in 1967, "North, East, South, West", consisted of several geometrically-shaped holes dug in the Sierra Nevada. The following year Heizer completed "Nine Nevada Depressions", a series of large negative sculptures located primarily on dry lakes throughout the state, Jean Dry Lake, Black Rock Desert and Massacre Dry Lake, near Vya, Nevada among them. In 1969, Heizer made the series Primitive Dye Paintings, in which white lime powder and concentrated aniline dyes were spread over the dry desert landscape, covering large areas that, when viewed from the air, formed amorphous, organic shapes. The culmination of this critical early period was the creation of "Double Negative" in 1969 and 1970, a project for which he displaced 240,000 tons of rock in the Nevada desert, cutting two enormous trenches—each one 50-feet-deep and 30-feet-wide and together spanning 1,500 feet—at the eastern edge of Mormon Mesa near Overton, Nevada.

Heizer has since continued his exploration of the dynamics between positive forms and negative space. His Adjacent, Against, Upon (1976) juxtaposes three large granite slabs in different relationships to cast concrete forms; the 30-50 ton granite slabs were quarried in the Cascade Mountain Range and transported by barge and train to Myrtle Edwards Park. For "Displaced/Replaced Mass" (1969/1977), later installed outside the Marina del Rey, California, home of Roy and Carol Doumani, he planted four granite boulders of different sizes from the High Sierra into lid-less concrete boxes in the earth so that the tops of the rocks are roughly level with the ground. For a 1982 work at the former IBM Building in New York, Heizer sheared off the top of a large rock and cut grooves into the surface before setting it on supports hidden within a stainless steel structure. Designed as a fountain, the boulder appears to float over running water. He called it Levitated Mass, a title he would use again in future. Commissioned by the president of the Ottawa Silica Company, the Effigy Tumuli earthwork in Illinois is composed of five abstract animal earthworks reclaiming the site of an abandoned surface coal mine along the Illinois River; the shapes (1983–85)—a frog, a water strider, a catfish, a turtle, and a snake—reflect the environment of the site, which overlooks the river.