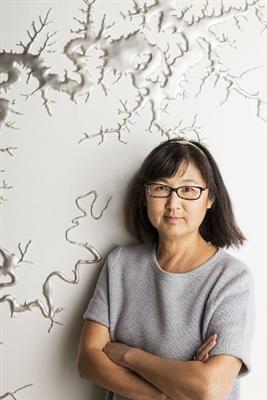 Photo by Special to the Democrat-Gazette

Maya Ying Lin (born October 5, 1959) is an American designer, architect and artist who is known for her work in sculpture and land art. She achieved national recognition at the age of 21 while still an undergraduate at Yale University when her design was chosen in a national competition for the Vietnam Veterans Memorial in Washington, D.C. It is considered one of the most influential memorials of the post-World War II period.

Lin has completed designs for other memorials, as well as for numerous public and private buildings, landscape design, and sculpture. Although Lin’s most well known sculptures and architectural work are historical memorials, she also works to memorialize nature through her environmentally themed works. In creating works which deal with the depleting environment, Lin aims to raise awareness for the environment for audiences in urban spaces.

Maya Lin was born in Athens, Ohio. Her parents had migrated to the United States from China, her father in 1948 and her mother in 1949, and settled in Ohio before Maya was born. Her father, Henry Huan Lin, born in Fuzhou, Fujian, was a ceramist and former dean of the Ohio University College of Fine Arts. Her mother, Julia Chang Lin, born in Shanghai, is a poet and taught literature at Ohio University. She is the niece of Lin Huiyin, who is an American-educated artist, poet and said to be the first female architect in modern China. Lin Juemin and Lin Yin Ming, both of whom are among the 72 martyrs of the Second Guangzhou Uprising, were cousins of her grandfather. Lin Chang-min, a Hanlin of Qing dynasty and the emperor's teacher, was the father of Lin Hui-yin and great-grandfather of Maya Lin.

Lin has an older brother, the poet Tan Lin. Growing up, she did not have many friends and stayed home a lot. She loved school and loved to study. When she was not studying, she took independent courses from Ohio University and spent her free time casting bronzes in the school foundry. Lin, having grown up as an Asian minority, has said that she "didn't even realize" she was Chinese until later in life. It was not until her 30s that she had a desire to understand her cultural background.

Lin graduated from Yale University, where she received a Bachelor of Arts degree in 1981 and a Master of Architecture degree in 1986.

Lin has stated that environmental issues have concerned her since she was very young, and she dedicated much of her time at Yale University to environmental activism. Much of her later work, after her work on memorials, focuses on the relationship that people have with their environment, which she displays in earthworks, sculptures, and installations. "I'm very much a product of the growing awareness about ecology and the environment al movement," Lin says. "I am very drawn to landscape, and my work is about finding a balance in the landscape, respecting nature not trying to dominate it. Even the Vietnam Veterans Memorial is an earthwork. All of my work is about slipping things in, inserting an order or a structuring, yet making an interface so that in the end, rather than a hierarchy, there is a balance and tension between the man-made and the natural." Lin's work centers on the concept of uncovering "hidden histories" to bring attention to landscapes and environments that may otherwise be inaccessible to viewers and "deploys the concept to discuss the inextricable relationship between nature and the built environment." Lin's focus on this relationship highlights the impact humanity has on the environment, and draws attention to her concerns such as global warming, endangered bodies of water, and animal extinction/endangerment. These issues are explored in what Lin calls her latest memorial, What Is Missing?.