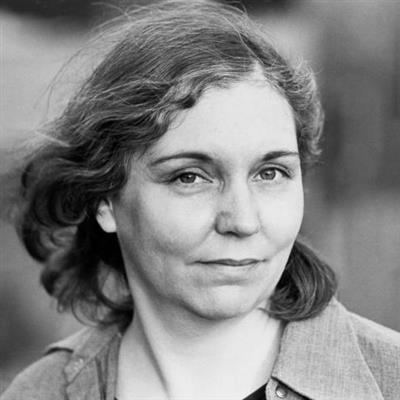 Nancy Holt (April 5, 1938 – February 8, 2014) was an American artist most known for her public sculpture, installation art and land art. Throughout her career, Holt also produced works in other media, including film, photography, and writing books and articles about art.

Nancy Holt was born in Worcester, Massachusetts. An only child, she spent a great deal of her childhood in New Jersey, where her father worked as a chemical engineer and her mother was a homemaker. She studied biology at Tufts University in Medford, Massachusetts. Three years after graduating, she married fellow environmental artist Robert Smithson in 1963.

In 2017 the Holt-Smithson Foundation was founded to continue the creative and investigative spirit of the artists Nancy Holt and Robert Smithson, who, over their careers, developed innovative methods of exploring our relationship with the planet, and expanded the limits of artistic practice. Through public service, the Foundation engages in programs that increase awareness of both artists’ creative legacies, continuing the transformation they brought to the world of art and ideas.

Holt began her artistic career as a photographer and as a video artist. In 1974, she collaborated with fellow artist Richard Serra on Boomerang, in which he videotaped her listening to her own voice echoing back into a pair of headphones after a time lag, as she described the disorienting experience.

Her involvement with photography and camera optics are thought to have influenced her later earthworks, which are “literally seeing devices, fixed points for tracking the positions of the sun, earth and stars.” Today Holt is most widely known for her large-scale environmental works, Sun Tunnels and Dark Star Park. However, she created site and time-specific environmental works in public places all over the world. Holt contributed to various publications, which have featured both her written articles and photographs. She also authored several books. Holt received five National Endowment for the Arts Fellowships, New York Creative Artist Fellowships, and a Guggenheim Fellowship. Holt along with Beverly Pepper was a recipient of the International Sculpture Center's 2013 Lifetime Achievement in Contemporary Sculpture Award. From 1995 to 2013, she worked and resided in Galisteo, New Mexico.

In 2008 Holt helped rally opposition to a plan for exploratory drilling near the site of Smithson’s Spiral Jetty at the Great Salt Lake in rural Utah. After Smithson’s death, Holt never remarried. Holt died in New York City on February 8, 2014 at the age of 75.

Holt is associated with earthworks or land art. Land art emerged in the 1960s, coinciding with a growing ecology movement in the United States, which asked people to become more aware of the negative impact they can have on the natural environment. Land art changed the way people thought of art; it took art out of the gallery or museum and into the natural landscape, the product of which were huge works engaging elements of the environment. Unlike much of the commercialized art during this time period, land art could not be bought or sold on the art market. Thus, it shifted the perspective of how people all over the world viewed art.