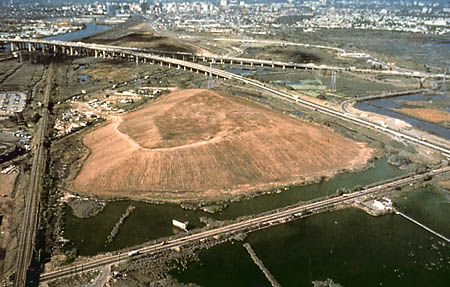 Located in Northern New Jersey, Sky Mound sits where a 57-acre (230,000 m2), 100-foot (30 m)-high landfill once stood. The state’s Hackensack Meadowland Development Commission (HMDC) asked Holt to reclaim the site in an effort to provide an environmentally safe spot for plant and animal life to reside and for humans to enjoy.

Still unfinished in April 2008, the landfill is to be turned into an earth sculpture and public park. The landfill has been covered with grass. Ten mounds stand upon the site, as well as steel poles, plants, and a pond, designed for the approximately 250 species of migratory birds that visit the area seasonally. There will eventually be wind indicators and gravel paths. On several astronomically significant dates each year, the work will provide its viewer with unique views of the sun, moon, and several stars.

In addition, a series of arcing pipes will go down into the landfill, recovering methane from the 10 million tons of garbage below. This will provide an alternative source of energy for those in the community.

Sky Mound’s location makes it visible and accessible to many people. Holt believes the work will increase awareness of the complex problem of how we dispose of our waste and trash. It also raises questions about the sun, as every ecosystem depends on the sun and its energy for survival. In 1991, funding on Sky Mound was stopped to perform a technological study at the site; currently construction remains postponed.