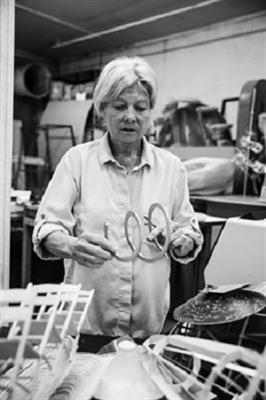 Alice Aycock (born November 20, 1946) is an American sculptor and installation artist. She was an early artist in the land art movement in the 1970s, and has created many large-scale metal sculptures around the world. Aycock's drawings and sculptures of architectural and mechanical fantasies combine logic and imagination, and intermingle science and faith.

Aycock was born in Harrisburg, Pennsylvania on November 20, 1946. She studied at Douglass College in New Brunswick, New Jersey, graduating with a Bachelor of Arts degree in 1968. She subsequently moved to New York City and obtained her Master of Arts in 1971 from Hunter College, where she was taught and supervised by sculptor and conceptual artist Robert Morris.

Aycock's early work focused on associations with the environment. Often built into or onto the land, her environmental sculptures and installation art addressed issues of privacy and interior space, physical enclosure, and the body's relationship to vernacular architecture and the built environment. Her land art focuses on "goal-directed" and exploratory situations for the audience, and the structures themselves are impermanent due to lack of maintenance. The work has been related to American Indian stockades, the Zuku kraal, ancient civilization labyrinths, and Greek temples.

One of her best known works of this variety is Maze (1972). Installed on Gibney Farm near New Kingston, Pennsylvania, Maze is thirty-two feet in diameter and constructed of five six-foot high concentric wooden rings with three openings through which the viewer could enter. Once inside, the participant is meant to experience disorientation as s/he traverses through its labyrinth to reach its center, and to feel similar discomfort again when exiting. Aycock was inspired by the axial alignment of a compass as well as author Jorge Luis Borges's essay, "Pascal's Sphere," which presents the idea that the center of the universe is located wherever the perceiver is standing. The artist said of Maze:

Additional works like Low Building with Dirt Roof (1973) and A Simple Network of Underground Wells and Tunnels(1975) involved the sculpting of natural landscapes by inserting manmade structures into the ground. Similar to works by Robert Smithson and other contemporaries at the time, Aycock was one of the few women artists working in this style. Her contributions to the field were highlighted in the 2015 exhibition "Decoys, Complexes and Triggers: Feminism and Land Art" in the 1970s at the Sculpture Center in New York.

Starting in 1977, use of recurrent themes of danger and unease were augmented by Aycock's growing interest in metaphysical issues. Her sculptures now excluded viewer participation and looked more like theatrical stage sets; and explored combinations of science, technology, and spirituality. The Beginnings of a Complex (1977), utilizing architectural façades and windows, was featured at her gallery installation for Documenta 6 as a symbol of this stylistic shift. The Machine That Makes the World (1979) reiterated this shift and marked the beginning of Aycock's work in large-scale sculptures and public installations over the next several decades.

After 1982, her work revolved around "blade machines" – sculptures made out of revolving, motorized metal blades. With its obsessive erudition, Aycock's art of cosmic machines has again been compared to Borges's stories which involve private metaphysics of the mind, dreams, space, and time. Like Borges, Aycock provokes a fear of an existing and ultimately incomprehensible higher order that man makes endless attempts to understand.