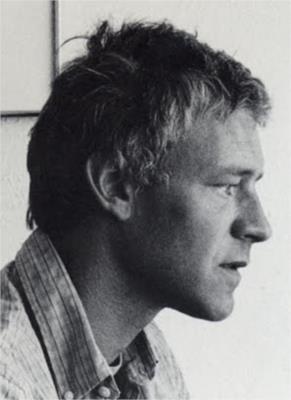 Jürgen Partenheimer (born 14 May 1947 in Munich, Germany) is a German artist. Since his participation at the Paris Biennial in 1980 and the Venice Biennial in 1986, his work has been shown internationally.

The work of Jürgen Partenheimer, emerged in Germany in the early 1980s, reveals the artist’s profound experience in his artistic activities which include painting, drawing, sculpture and which also draw on theory, poetry and prose as his referential grammar of artistic expression. His work has an abstract quality, which seems to express a state of uncertainty and inconsistency, calling in question the viewer's own preconceived certainties. Marked by a post-minimalist background and a poetic intensity, his art has been referred to as metaphysical realism. “Metaphysical Realism”, for Partenheimer, replaces abstraction and points beyond the facticity of the form. He approaches his subject matter at the very boundary of its corporeality, at the very point of transition between its materiality and its immateriality.

Moves to Düsseldorf. 1979 first solo exhibition at the Richard Demarco Gallery in Edinburgh. 1980 -1981 participates at the XI Paris Biennial, France and XVI São Paulo Biennial, Nucleus I, Brazil. 1982 National Endowment for the Arts with exhibition of workbooks and drawings at Franklin Furnace, New York. 1983–85 visiting artist to San Francisco Art Institute, California and distinguished visiting professor at the University of California at Davis. 1986 participates at XLII Venice Biennial. 1987–90 visiting artist to Rijksakademie van Beeldenden Kunsten in Amsterdam, The Netherlands. Artist in residence to Fine Arts Work Centre, Provincetown, Massachusetts. 1991 writes his poetic manifesto “De coloribus - Notes on colour”, which is co-published by Hine Editions, San Francisco and Art-Book, Amsterdam. 1994 Partenheimer was part of 'A century of Artists' Books' at MOMA, a show curated by Riva Castleman. 1995 receives art critic’s award of the year for best show of the season in Madrid, Spain. 1997–1998 comprehensive solo exhibitions at the Stedelijk Museum Amsterdam, the IVAM Valencia and Kunsthalle Karlsruhe. 1999 invited to develop an exhibition of sculpture, painting and work on paper for the space of the Contemporary Art Museum CGAC in Santiago de Compostela, Spain. 2000 first German contemporary artist to receive a retrospective at the National Museum of Fine Arts in Beijing and the Nanjing Museum in Nanjing, China.