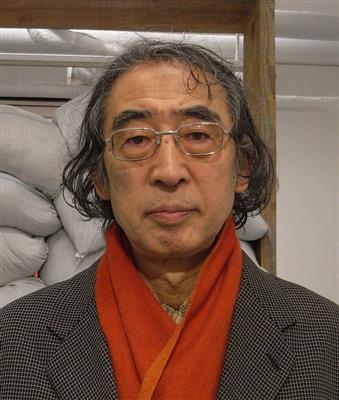 He is one of the key members of Mono-ha, a group of artists who became prominent in the late 1960s and 1970s. The Mono-ha artists explored the encounter between natural and industrial materials, such as stone, steel plates, glass, light bulbs, cotton, sponge, paper, wood, wire, rope, leather, oil, and water, arranging them in mostly unaltered, ephemeral states. The works focus as much on the interdependency of these various elements and the surrounding space as on the materials themselves.

Kishio Suga was born in Morioka, Iwate Prefecture. From 1964 to 1968, he was a student in the painting department at Tama Art University in Tokyo. While at Tama, Suga read the writings of Jean Baudrillard, Gilles Deleuze, Kitarō Nishida, Kei Nishitani, Nāgārjuna, and Vasubandhu.

During this period, two artists who taught at the university were important influences on Suga. Yoshishige Saito encouraged Suga and other students to take a deconstructive approach to modernism and Euro-American-centric art theory. Another influential teacher was the artist Jiro Takamatsu, whose illusionistic paintings and sculpture were central to the development of the Tokyo art scene at that time. Suga’s early work reflected this approach. In his first solo exhibition, at Tsubaki Kindai Gallery, Tokyo, in November 1968, Suga presented Space Transformation (1968) (転移空間), a freestanding structure of red-painted wood that gave the illusion of a stack of boxes collapsing under their own weight.

At the same time as Suga was producing these illusionistic paintings and sculptures, he was already shifting to an engagement with raw materials in works such as Layered Space (1968) (積層空間), a transparent acrylic box containing layers of sawdust, cotton, ashes, plastic dust, and soil.

In the second half of 1968, this exploration of raw materials, ephemerality and space gained recognition as a broader movement. Lee Ufan presented his first work juxtaposing rocks and steel plates. At the 1st Kobe Suma Rikyū Park Contemporary Sculpture Exhibition (第一回野外彫刻展), Nobuo Sekine presented Phase—Mother Earth (位相—大地), a cylindrical hole in the earth, 2.7 meters deep and 2.2 meters in diameter, with the excavated earth molded into a cylinder of exactly the same dimensions.

Suga came to articulate his ideas in terms of hōchi (放置, release), an act that highlights the reality of mono (もの, things) and their interdependence with the surrounding jōkyō (状況, situation, context, or expanse). In his ongoing investigation of "situation" and the "activation (アクティベーション) of existence," Suga has produced many installations that are emblematic of the Mono-ha approach.

Infinite Situation I (window) (1970) (無限状況), consisted of two blocks of wood of different lengths propping open adjacent windows in a staircase at the Trends in Contemporary Art exhibition at the National Museum of Modern Art, Kyoto, in 1970.

In 1971, Suga created Law of Situation (状況律), the artist placed ten flat stones in a line on a 20-meter-long pane of glass and floated it on the surface of a lake in Tokiwa Park, Ube City, Yamaguchi Prefecture.