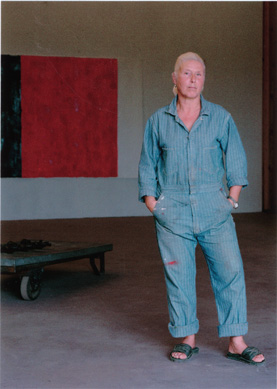 Harmony Hammond (born February 8, 1944 in Chicago, Illinois) is an American artist and writer.

Harmony Hammond earned a B.A. of Arts in painting from the University of Minnesota in 1967. She co-founded the A.I.R. Gallery in 1972; it was the first women's cooperative art gallery in New York. She also co-founded Heresies: A Feminist Publication of Art and Politics in 1976, and coedited it. Heresies was founded by Heresies Collective, whose core group consisted of Joyce Kozloff, Miriam Schapiro, Joan Semmel, Lucy Lippard, Mary Beth Edelson, Nancy Spero, and Harmony Hammond. She was an instructor at the New York Feminist Art Institute.

Hammond moved to New York in 1969, just months after the Stonewall Riots. During the late 1960's, Hammond was married for a short time, and found out she was pregnant with her daughter, which is when she and her husband at the time decided to part ways. In 1973, Hammond publicly came out as a lesbian.

Hammond curated A Lesbian Show in 1978 at 112 Greene Street Workshop, featuring works by lesbian artists. She was one of the featured artists in the "Great American Lesbian Art Show" at the Woman's Building in 1980. She also curated an exhibition in 1999 at Plan B Evolving Arts in Santa Fe titled Out West, bringing together 41 lesbian, gay, bisexual, transgender and two-spirit artists from the Southwest.

In 2000 she published Lesbian Art in America: A Contemporary History. She is featured in two 2010 films on feminist art - The Heretics, directed by Joan Braderman which focuses on the founders of the magazines Heresies: A Feminist Publication of Art and Politics in 1976; and !Women Art Revolution, directed by Lynn Hershman Leeson.

In 1984, she moved to New Mexico. As a tenured full professor, Hammond taught painting, combined media and graduate critiques at the University of Arizona in Tucson, from 1988 to 2005. Hammond continues to teach workshops and writes, curates, and lectures on feminist, lesbian, and queer art.

In her art, Hammond asserts that traditionally feminine qualities are worthwhile artistic subjects and means for artistic creation. To this end, for example, she created sculptures in the early 1970s featuring swaths of fabric, a traditionally feminine material, as a primary material. There were four fabric series: Bags (1971), Presences (1972), Floorpieces (1973), and Wrapped Sculptures (1977-1984). Harmony Hammond's paintings themselves show how they were made and are almost all abstract.

Hammond has had more than 30 solo exhibitions internationally. Her works have been shown in the Tucson Museum of Art, Museum of Contemporary Art, Gemeentemuseum Den Haag, the Vancouver Art Gallery, National Academy Museum, and Museo Tamayo. Her works are also included in permanent collections in the Metropolitan Museum of Art, the Walker Art Center, the Brooklyn Museum, the National Museum of Women in the Arts, the Art Institute of Chicago, the New Mexico Museum of Art, and the Wadsworth Atheneum.

She has received fellowships from the National Endowment of the Arts, the Rockefeller Foundation, the John Simon Guggenheim Memorial Foundation, the Adolph and Esther Gottlieb Foundation, and the Pollock-Krasner Foundation among others. In 2013, the Women's Caucus for Art announced that Hammond will be one of the 2014 recipients of the organization's Lifetime Achievement Award.