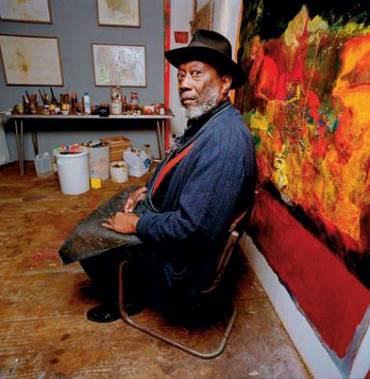 Richard Sheridan Franklin Bowling OBE RA LG (born 29 February 1936), known as Frank Bowling, is a Guyana-born British artist who is widely considered to be one of the most distinguished artists to emerge from post-war British art schools. His paintings relate to Abstract expressionism, Color Field painting and Lyrical Abstraction.

Bowling was born in Bartica, Guyana, South America. His father was a police district paymaster and his mother a seamstress, and in 1950, at the age of 15, he moved to England, where he lived with an uncle and completed his education.

After doing his National Service in the Royal Air Force, Bowling went on to study art, despite earlier ambitions to be a poet and a writer. He studied at the Chelsea School of Art, then in 1959 won a scholarship to London's Royal College of Art, where fellow students included artists such as David Hockney, Derek Boshier, Allen Jones, R. B. Kitaj and Peter Phillips. At graduation in 1962, Hockney was awarded the gold medal while Bowling was given the silver. Bowling had been tipped to win the gold but due to his controversial 1960 marriage to Royal College Registrar Paddy Kitchen (they divorced in the late 1960s), he was relegated to silver. His first one-person exhibition, entitled "Image in Revolt," was held in London in 1962 at the Grabowski Galleries, and other exhibitions followed. However, Bowling was frustrated at being pigeonholed as a Caribbean artist; as he said in a Guardian interview with Laura Barnett: "It seemed that everyone was expecting me to paint some kind of protest art out of postcolonial discussion. For a while I fell for it. I painted a picture called the Martyrdom of Patrice Lumumba."

A move to New York in the mid-1960s exposed Bowling to his American contemporaries and soon won him a place in the 1971 Whitney Biennial. As Maya Jaggi writes: "unlike contemporaries who founded British pop art, Bowling took a singular path, from Bacon-esque figurative painting to an abstract art touched by personal memory and history.... Encouraged by the US critic Clement Greenberg, he found a freedom in abstract art, alongside Mark Rothko, Jackson Pollock and Barnett Newman." Between 1969 and 1972 Bowling was a contributing editor of Arts Magazine.

Bowling now spends part of each year between London and New York, where he maintains studios.

Bowling's paintings have been shown in numerous exhibitions in Europe, the United Kingdom and the United States and are included in major private and corporate collections worldwide. His work can also be seen in the permanent collections of the Metropolitan Museum of Art and Museum of Modern Art in New York, as well as the Tate Gallery in London. In 2017, there is a retrospective of his work at Haus der Kunst in Munich.

Bowling has been the recipient of two Guggenheim Fellowships.

On 26 May 2005 Bowling was elected a member of England's Royal Academy of Arts. He was among about a dozen artists proposed to fill one of two vacancies in the 80-member academy, and is the first Black artist to be elected a Royal Academician in the history of the institution.