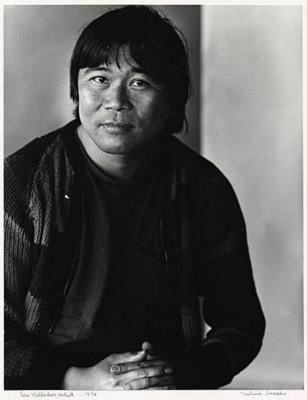 Leo Valledor (1936–1989) was a Filipino-American painter who pioneered the hard-edge painting style. During the 1960s he was a member of the Park Place Gallery in Soho, New York City, which exhibited many influential and significant artists of the period. He was a leader of the minimalist movement in the 1970s.

Leo Valledor was born and raised in the Fillmore district of San Francisco. His cousin was San Francisco artist Carlos Villa.

From 1953 until 1955, Valledor was a student at the California School of Fine Arts (known currently as San Francisco Art Institute) under auspices of a scholarship. However, as art historian Paul J. Karlstrom wrote, "Despite a year as a scholarship student at CSFA, Valledor was largely self-taught, but he was gifted and quickly developed a gestural abstract style reflecting the influence of Mark Tobey. In addition to Tobey, his earliest influences were Paul Klee, Arshile Gorky, and Bradley Walker Tomlin." At the age of 19 in 1955 he had his first solo show "Compositions" at the historical Six Gallery. He showed his "Black and Blue Series."

When he moved to New York City in 1961 he became a member of the influential Park Place Gallery in SoHo, further delving into his avant garde interests of minimalism and conceptualism. It was considered the first gallery in SoHo, and included artists like Edwin Ruda, Mark di Suvero, Peter Forakis, and Forrest Myers.

In the late 1970s and early 1980s Valledor became the Art Exhibition Director and teacher at Lone Mountain College in San Francisco. He was a guest teacher at the University of California, Berkeley. He created a roof mural for the Department of Public Works approved by the San Francisco Arts Commission. He received his first National Endowment for the Arts Artist Fellowship Grant in 1981, and received another grant in 1982. In the eighties he received a California Arts Council artist-in-residence grant in the South of Market community. He also taught at the San Francisco Art Institute. He lived in the city of San Francisco until his death in 1989. He was survived by his wife Mary Valledor and his son Rio Valledor.

Art critics have placed his work in context with the work of Ellsworth Kelly, Barnett Newman, and Leon Polk Smith. Other art historians, like Frances Colpitt, have found his work to be in relation to Frank Stella. Colpitt states, "Less assimilable to Op art experiments of the early 1960s, Valledor's shaped canvases are more reminiscent of Frank Stella's contemporaneous work... But Skeedo (1965) is so quirky and radically shaped that it seems without precedent..." Art critic Knute Stiles reviewed Valledor's shows in San Francisco in the 1976: "He is one of a dozen modernists who subscribe to one or another of the subgroups of what might be called International Style Geometric abstraction. His work has a classical or pure form-oriented bent, but in the early '60s he emerged as a pioneer of the Minimalism which was to dominate that decade." Valledor’s work explores the juxtapositions of colors and geometric forms as metaphors for the interplay of elements in the natural world, as Lawrence Rinder explains: