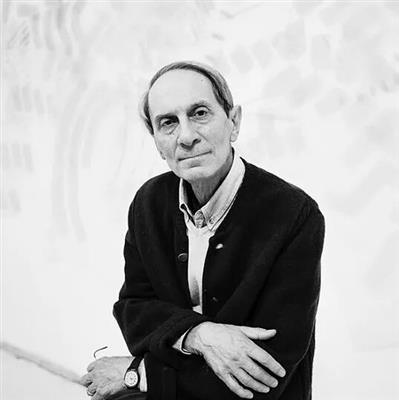 Giorgio Griffa (born in Turin, 29 March 1936) is an Italian abstract painter living and working in Turin.

Giorgio Griffa never received a formal art education. He began painting as a child, taking lessons from local painters at the Circolo degli Artisti in Turin.
After completing a degree in law in 1958, Griffa became a practicing lawyer.
In the sixties, Griffa began working as an assistant to the Italian painter Filippo Scroppo, a member of the MAC (Art Concreta) movement and a teacher at the Accademia Albertina in Turin.

In 1968, Giorgio Griffa abandoned figurative painting in favor of a format of abstract painting that still characterizes his work to this day. Painting with acrylic on raw un-stretched canvas, burlap and linen, Griffa's works are nailed directly to the wall along their top edge. When not exhibited, the works are folded and stacked, resulting creases that create an underlying grid for his compositions. In keeping with his idea that painting is "constant and never finished", many of his works display a deliberate end-point that has been described as "stopping a thought midsentence." Despite early associations with movements such as Arte Povera and Minimalism, Giorgio Griffa's work was not exhibited in the United States for 40 years after his first solo exhibition in New York at Ileana Sonnabend's gallery. In 2012, Giorgio Griffa had a solo exhibition, Fragments 1968 – 2012 at Casey Kaplan gallery in New York, leading him to be named one of the "10 thrilling rediscoveries from 2012." His exhibition was interrupted by Hurricane Sandy and later reopened in 2013. In her review of the exhibition, Roberta Smith wrote "His art deserves a place in the global history of abstraction".