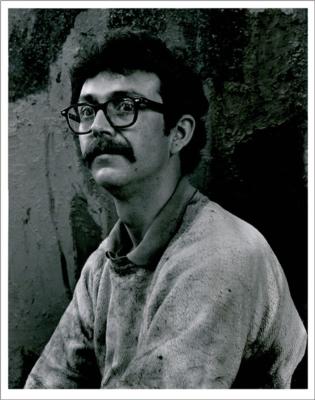 Born in Santa Monica, California, he was raised in Cheyenne, Wyoming. In 1955–56 he attended the University of Wyoming. In 1959 at the age of 22 became interested in painting. In 1960–64 he attended the San Francisco Art Institute. Abstract Expressionism, the prevailing artistic movement of the time, would have an influence on many of his future works. In 1962 he was a Yale-Norfolk Summer School Grantee. In 1963 his paintings became hard-edged, geometric and optical in style, and by 1964 his works were shown in important museums and galleries. He lived and worked in Los Angeles, 1965–71; and in Malibu, CA, 1972–1990. Since 1991 he has lived and worked in Arroyo Hondo, New Mexico on the outskirts of Taos, New Mexico.

Ronald Davis from the earliest days of his career had a significant impact on contemporary abstract painting of the mid-1960s. According to art critic Michael Fried: "Ron Davis is a young California artist whose new paintings, recently shown at the Tibor de Nagy Gallery in New York, are among the most significant produced anywhere during the past few years, and place him, along with Stella and Bannard, at the forefront of his generation." He had his first one-person exhibition at the Nicholas Wilder Gallery in Los Angeles in 1965.

Barbara Rose wrote an in depth essay about Ronald Davis' paintings of the 1960s in the catalogue accompanying an exhibition of his Dodecagon Series in 1989 in Los Angeles. Among other observations she wrote: "Davis saw a way to use Duchamp's perspective studies and transparent plane in The Large Glass for pictorial purposes. Instead of glass, he used fiberglass to create a surface that was equally transparent and detached from any illusion of reality. Because his colored pigments are mixed into a fluid resin and harden quickly, multiple layers of color may be applied without becoming muddy. his is essentially an inversion of Old Master layering and glazing except that color is applied behind rather than on top of the surface. Alone among his contemporaries, Ronald Davis was equally concerned with traditional problems of painting: space, scale, detail, color relationships and illusions as he was with the California emphasis on hi-tech craft and industrial materials. How to reconcile the literal object produced with the latest technology with transcendental metaphor became the problem that occupied throughout the Sixties."

In a letter to the Tate Gallery, which had acquired the 1968 painting Vector, Davis described the technique he began using in 1966:

In an Artforum article in 1970 artist/art critic Walter Darby Bannard commented: "Though Davis is plagued by "series" ideas, and has yet to get a grip on the inherent monumentality of his style, he is young and inspired, and these things will evolve naturally." From 1966 to 1972 Ron Davis created geometric shaped, illusionistic paintings using polyester resins and fiberglass. About Davis' paintings of the late 1960s in an essay accompanying the Ronald Davis retrospective exhibition Forty Years of Abstraction, at the Butler Institute of American Art in 2002, the abstract painter Ronnie Landfield wrote: "the Dodecagons from 1968–69 remain among the most visually stunning, audacious and intellectually interesting bodies of work made by an abstract painter in the last half of the twentieth century."