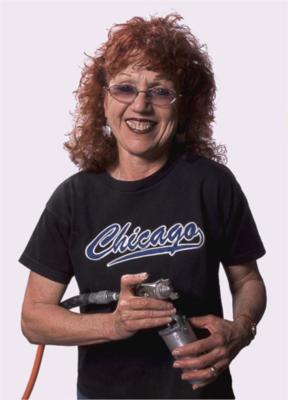 Judy Chicago is an American feminist artist and writer known for her large collaborative art installation pieces which examine the role of women in history and culture. Born in Chicago, Illinois, as Judith Cohen, she would change her name after the death of her father and her first husband, choosing to disconnect from the idea of male dominated naming conventions. By the 1970s, Chicago had coined the term "feminist art" and had founded the first feminist art program in the United States. Chicago's work incorporates skills stereotypically placed upon women artistically, such as needlework, counteracted with stereotypical male skills such as welding and pyrotechnics. Chicago's masterpiece work is The Dinner Party, which resides in the collection of the Brooklyn Museum.

Judy Chicago (born Judith Sylvia Cohen, July 20, 1939) is an American feminist artist, art educator, and writer known for her large collaborative art installation pieces about birth and creation images, which examine the role of women in history and culture. By the 1970s, Chicago had founded the first feminist art program in the United States. Chicago's work incorporates a variety of artistic skills, such as needlework, counterbalanced with labor-intensive skills such as welding and pyrotechnics. Chicago's most well known work is The Dinner Party, which is permanently installed in the Elizabeth A. Sackler Center for Feminist Art at the Brooklyn Museum. The Dinner Party celebrates the accomplishments of women throughout history and is widely regarded as the first epic feminist artwork. Other notable art projects by Chicago include International Honor Quilt, The Birth Project, Powerplay, and The Holocaust Project.

Judy Chicago was born Judith Sylvia Cohen in 1939, to Arthur and May Cohen, in Chicago, Illinois. Her father came from a twenty-three generation lineage of rabbis, including the Vilna Gaon. Unlike his family predecessors, Arthur became a labor organizer and a Marxist. He worked nights at a post office and took care of Chicago during the day, while May, who was a former dancer, worked as a medical secretary. Arthur's active participation in the American Communist Party, liberal views towards women and support of worker's rights strongly influenced Chicago's ways of thinking and belief. During the McCarthyism era in the 1950s, Arthur was investigated, which made it difficult for him to find work and caused the family much turmoil. In 1945, while Chicago was alone at home with her infant brother, Ben, an FBI agent visited their house. The agent began to ask the six-year-old Chicago questions about her father and his friends, but the agent was interrupted upon the return of May to the house. Arthur's health declined, and he died in 1953 from peritonitis. May would not discuss his death with her children and did not allow them to attend the funeral. Chicago did not come to terms with his death until she was an adult; in the early 1960s she was hospitalized for almost a month with a bleeding ulcer attributed to unresolved grief.

While at UCLA, she became politically active, designing posters for the UCLA NAACP chapter and eventually became its corresponding secretary. In June 1959, she met and became romantically linked with Jerry Gerowitz. She left school and moved in with him, for the first time having her own studio space. The couple hitch hiked to New York in 1959, just as Chicago's mother and brother moved to Los Angeles to be closer to her. The couple lived in Greenwich Village for a time, before returning in 1960 from Los Angeles to Chicago so she could finish her degree. Chicago married Gerowitz in 1961. She graduated with a Bachelor of Fine Arts in 1962 and was a member of the Phi Beta Kappa Society. Gerowitz died in a car crash in 1963, devastating Chicago and causing her to suffer from an identity crisis until later that decade. She received her Master of Fine Arts from UCLA in 1964.