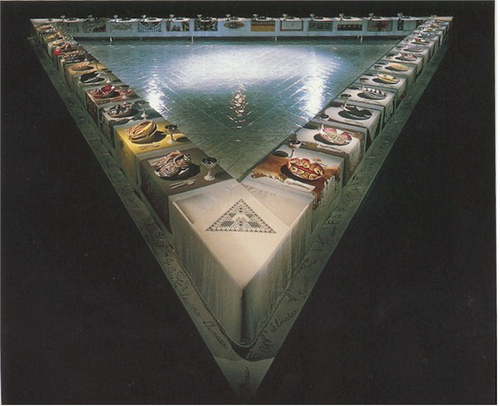 The Dinner Party is an installation artwork by feminist artist Judy Chicago depicting place settings for 39 mythical and historical famous women. It was produced from 1974 to 1979 as a collaboration and was first exhibited in 1979. Subsequently, despite art world resistance, it toured to 16 venues in 6 countries on 3 continents to a viewing audience of 15 million.

The Dinner Party was created with the assistance of numerous volunteers, with the goal to "end the ongoing cycle of omission in which women were written out of the historical record." The work began modestly as "Twenty-Five Women Who Were Eaten Alive", a way in which Chicago could use her "butterfly-vagina" imagery and interest in china painting in a high-art setting. The table is triangular and measures 14.63 m (forty-eight feet) on each side. Each place setting features a table runner embroidered with the woman's name and images or symbols relating to her accomplishments, with a napkin, utensils, a glass or goblet, and a plate. Many of the plates feature a butterfly- or flowerlike sculpture as a vulva symbol. A collaborative effort of female and male artisans, The Dinner Party celebrates traditional female accomplishments such as textile arts (weaving, embroidery, sewing) and china painting, which have been framed as craft or domestic art, as opposed to the more culturally valued, male-dominated fine arts. The white floor of triangular porcelain tiles is inscribed with the names of a further 999 notable women. The 39 plates themselves start flat and begin to emerge in higher relief towards the very end of the chronology, meant to represent modern woman's gradual independence and equality, though it is still not totally free of societal expectations. The work also uses supplementary written information such as banners, timelines, and a three-book exhibition publication to provide background information on each woman included and the process of making the work.

The Dinner Party prompted many varied opinions. Feminist critic Lucy Lippard stated, "My own initial experience was strongly emotional… The longer I spent with the piece, the more I became addicted to its intricate detail and hidden meanings", and defended the work as an excellent example of the feminist effort. These reactions are echoed by other critics, and the work was glorified by many. Just as adamant, however, were the immediate critiques of the work. Hilton Kramer, for example, argued, "The Dinner Party reiterates its theme with an insistence and vulgarity more appropriate, perhaps, to an advertising campaign than to a work of art". He called the work not only a kitsch object but also "crass and solemn and singleminded", "very bad art,… failed art,… art so mired in the pieties of a cause that it quite fails to acquire any independent artistic life of its own". Maureen Mullarkey also criticized the work, calling it preachy and untrue to the women it claims to represent. She especially disagreed with the sentiment she labels "turn ‘em upside down and they all look alike", an essentializing of all women which does not respect the feminist cause.

Mullarkey also called the hierarchical aspect of the work into question, claiming that Chicago took advantage of her female volunteers. Similarly, Roberta Smith stated that "its historical import and social significance may be greater than its aesthetic value". Amelia Jones, for example, places the work in the context of both art history and the evolution of feminist ideas to explain critical responses of the work. She discusses Hilton Kramer's objection to the piece as an extension of Modernist ideas about art, stating, "the piece blatantly subverts modernist value systems, which privilege the ‘pure’ aesthetic object over the debased sentimentality of the domestic and popular arts". Jones also addresses some critics’ argument that The Dinner Party is not high art because of its huge popularity and public appeal. Where Kramer saw the work's popularity as a sign that it was of a lesser quality, Lippard and Chicago herself thought that its capability of speaking to a larger audience should be considered a positive attribute.

The "butterfly vagina" imagery continues to be both highly criticized and esteemed. Many conservatives criticized the work for reasons summed up by Congressman Robert K. Dornan in his statement that it was "ceramic 3-D pornography", but some feminists also found the imagery problematic because of its essentializing, passive nature. However, the work fits into the feminist movement of the 1970s which glorified and focused on the female body. Other feminists have disagreed with the main idea of this work because it shows a universal female experience, which many argue does not exist. For example, lesbians and women of ethnicities other than white and European are not well represented in the work.

Jones presents the argument regarding the collaborative nature of the project. Many critics attacked Chicago for claiming that the work was a collaboration when instead she was in control of the work. Chicago, however, had never claimed that the work would be this kind of ideal collaboration and always took full responsibility for the piece.

Artist Cornelia Parker nominated it as a work she would like to see "binned", saying, "Too many vaginas for my liking. I find it all about Judy Chicago's ego rather than the poor women she's supposed to be elevating – we're all reduced to vaginas, which is a bit depressing. It's almost like the biggest piece of victim art you've ever seen. And it takes up so much space! I quite like the idea of trying to fit it in some tiny bin – not a very feminist gesture but I don't think the piece is either."