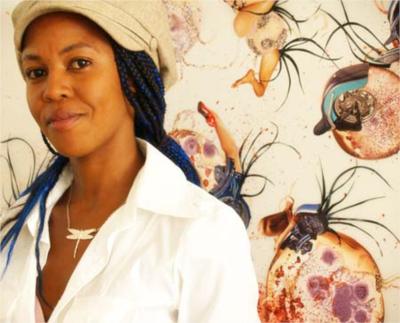 Wangechi Mutu (born 22 June 1972) is an artist who lives and works in Brooklyn, New York. Through a variety of media including painting collage, sculpture, performance and video, Wangechi Mutu explores questions of self-image, gender constructs, cultural trauma and environmental destruction.

Mutu was born in Nairobi, Kenya, where she was educated at Loreto Convent Msongari (1978–1989) and later studied at the United World College of the Atlantic, Wales (I.B., 1991). Mutu moved to New York in the 1990s, focusing on Fine Arts and Anthropology at The New School for Social Research and Parsons School of Art and Design. She earned a BFA from Cooper Union for the Advancement of the Arts and Science in 1996 and a master's degree in sculpture from Yale School of Art in 2000.

Mutu's work has been exhibited at galleries and museums worldwide including the San Francisco Museum of Modern Art, the Miami Art Museum, Tate Modern in London, the Studio Museum in Harlem in New York, Museum Kunstpalast in Düsseldorf, Germany the Centre Georges Pompidou in Paris, the Nasher Museum of Art at Duke University. Her first solo exhibition at a major North American museum opened at the Art Gallery of Ontario in March 2010. Her first U.S. solo exhibition, Wangechi Mutu: A Fantastic Journey in the United States opened at Nasher Museum of Art on 21 March 2013. A Fantastic Journey subsequently traveled to the Brooklyn Museum's Elizabeth A. Sackler Center for Feminist Art in October 2013. She has held recent one-person shows at the Museum of Contemporary Art Australia; Deutsche Guggenheim, Berlin; the Brooklyn Museum of Art; Montreal Museum of Contemporary Art; San Francisco Museum of Modern Art; Staatlichen Kunsthalle Baden-Baden, Germany; Wiels Contemporary Art Center, Brussels; the Nasher Museum of Art at Duke University, North Carolina; the Block Museum of Art at Northwestern University, Illinois; and Miami Art Museum.

She participated in the 2008 Prospect 1 Biennial in New Orleans and the 2004 Gwangju Biennale in South Korea. Her work has been featured in major exhibitions including Greater New York at the P.S.1 Contemporary Art Center and the Museum of Modern Art in New York, Black President: The Art and Legacy of Fela Anikulapo-Kuti at the New Museum of Contemporary Art in New York and the Barbican Centre in London, and USA Today at the Royal Academy in London.

On 23 February 2010, Wangechi Mutu was honoured by Deutsche Bank as their first "Artist of the Year". The prize included a solo exhibition at the Deutsche Guggenheim in Berlin. Titled My Dirty Little Heaven, the show travelled in June 2010 to the Wiels Center for Contemporary Art in Forest, Belgium.

In Fall 2013, the creative team of Wangechi Mutu took part in the main project of the 5th Moscow Biennale of Contemporary Art.

In 2013, Mutu was awarded the BlackStar Film Festival Audience Award for Favorite Experimental Film in Philadelphia, PA for her film The End of Eating Everything, as well as the Brooklyn Museum Artist of the Year, Brooklyn, NY.