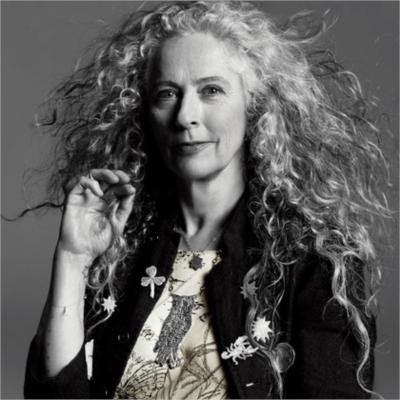 Kiki Smith (born January 18, 1954) is a West German-born American artist whose work has addressed the themes of sex, birth and regeneration. Her figurative work of the late 1980s and early 1990s confronted subjects such as AIDS and gender, while recent works have depicted the human condition in relationship to nature. Smith lives and works in the Lower East Side neighborhood of New York City.

Smith’s father was artist Tony Smith and her mother was actress and opera singer Jane Lawrence. Although Kiki's work takes a very different form than that of her parents, early exposure to her father's process of making geometric sculptures allowed her to experience formal craftsmanship firsthand. Her childhood experience in the Catholic Church, combined with a fascination for the human body, shaped her work conceptually.

Smith moved from Germany to South Orange, New Jersey as an infant in 1955. She subsequently attended Columbia High School. Later, she was enrolled at Hartford Art School in Connecticut for eighteen months from 1974–75. She then moved to New York City in 1976 and joined Collaborative Projects (Colab), an artist collective. The influence of this radical group's use of unconventional materials can be in seen in her work. For a short time in 1984, she studied to be an emergency medical technician and sculpted body parts, and by 1990, she began to craft human figures.

Prompted by her father's death in 1980 and by the AIDS death of her sister, the underground actress, Beatrice “Bebe” Smith in 1988, Smith began an ambitious investigation of mortality and the physicality of the human body. She has gone on to create works that explore a wide range of human organs; including sculptures of hearts, lungs, stomach, liver and spleen. Related to this was her work exploring bodily fluids, which also had social significance as responses to the AIDS crisis (blood) and women's rights (urine, menstrual blood, feces).

Smith has experimented with a wide range of printmaking processes. Some of her earliest print works were screen-printed dresses, scarves and shirts, often with images of body parts. In association with Colab, Smith printed an array of posters in the early 1980s containing political statements or announcing Colab events. In 1988 she created "All Souls", a fifteen-foot screen-print work featuring repetitive images of a fetus, an image Smith found in a Japanese anatomy book. Smith printed the image in black ink on 36 attached sheets of handmade Thai paper.

MoMA and the Whitney Museum both have extensive collections of Smith's prints. In the "Blue Prints" series, 1999, Kiki Smith experimented with the aquatint process. The "Virgin with Dove" was achieved with an airbrushed aquatint, an acid resist that protects the copper plate. When printed, this technique results in a halo around the Virgin Mary and Holy Spirit.

Mary Magdelene (1994), a sculpture made of silicon bronze and forged steel, is an example of Smith's non-traditional use of the female nude. The figure is without skin everywhere but her face, breasts and the area surrounding her navel. She wears a chain around her ankle; her face is relatively undetailed and is turned upwards. Smith has said that when making Mary Magdalene she was inspired by depictions of Mary Magdalene in Southern German sculpture, where she was depicted as a "wild woman". Smith's sculpture "Standing" (1998), featuring a female figure standing atop the trunk of a Eucalyptus tree, is a part of the Stuart Collection of public art on the campus of the University of California, San Diego.