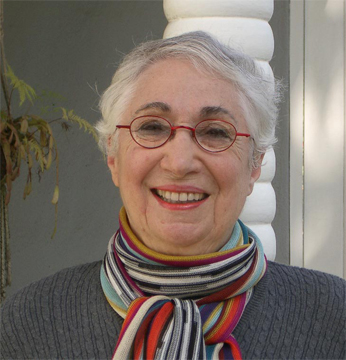 Sonya Rapoport is an American conceptual/digital artist and New media artist who has created computer-assisted interactive installations and participatory web-based artworks. She is also known for her early contributions to abstract expressionism and Pattern & Decoration.

Sonya Rapoport (1923 – 2015) was an American Conceptual and New Media artist. Originally trained as an Abstract Expressionist painter, in the 1960s Rapoport turned to challenging the domain of science by questioning its rigid conventions in performances and installations from a feminist perspective. She was a pioneer among artists using emerging computer technologies since the 1980s.

Rapoport (née Goldberg) grew up in Brookline, Massachusetts. She regularly attended Saturday classes at the Boston Museum of Fine Arts and spent summers at the art colony in Ogunquit, Maine.

In 1941 Rapoport entered Massachusetts College of Art. She met her future husband Henry Rapoport while he was a Ph.D. Candidate at Massachusetts Institute of Technology. A year later, she transferred to Boston University to study Biology. In 1944 she married Henry Rapoport and the couple moved to New York, where Sonya Rapoport enrolled in New York University and, in 1946, received her B.A. in Labor Economics. She then attended the Art Students League of New York where she studied with Reginald Marsh. In September 1946 the couple moved to Washington, D.C., where Rapoport entered the Corcoran School of Art to study figurative art and oil painting.

In late September 1947, Henry Rapoport accepted a position as professor of organic chemistry at the University of California, Berkeley. Sonya Rapoport studied at the UC Berkeley’s Art Department with Erle Loran and received an MA in Painting in 1949.

Rapoport’s early Abstract Expressionist paintings were the subject of a solo exhibition at the California Palace of the Legion of Honor in 1963. Following the show, Rapoport surprised her critics and mentors by abandoning the dominant Abstract Expressionist style of painting. In the new Fabric Paintings (1966–69) she challenged herself by purchasing pre-printed commercial fabrics and using them as her canvas. She experimented with appropriated materials, silkscreen and acrylic paint on inexpensive textiles. In a conversation with Peter Selz, as reported in his biography Sketches of a Life in Art, Rapoport described this fabric as “funky”, a term that she and Selz then applied to a group of artists with similar interests, coining the term “funk art.”

Paintings and Works on Paper

In 1971 Rapoport discovered a series of antique geological survey charts in a desk she had purchased. Drawing and painting directly on these, she further developed her pictorial language of shapes to represent gendered symbols – a plastic housing was a uterus, a mandarin orange was a fetus, a cue holder was an udder, a fleur-de-lis was an infant, etc. As her interest in exploring the meaning of these symbols grew, she began copying elements from the survey charts, including the grid, numerical data, and written notation, into large scale, acrylic, airbrushed paintings. These works represent a critical transition to her interest in information, symbolic communication, and visual analysis.

In early 1976 Rapoport chanced on a box of discarded computer printouts in the basement of the UC Berkeley Mathematics Department, a find which eventually lead to her reinvention as a digital artist. Printed in standard carbon-black dot matrix font on ruled, perforated, wide-format paper, these data sheets represent complex coded analyses of information. At this early stage, Rapoport did not have access to the meaning of the printouts. She used a limited palette of colored pencil and letter stencils to respond aesthetically to the printed data-sets and charts, resulting in dense, intricate abstract drawings. She soon began her collaboration with Professor of Anthropology Dorothy Washburn, creating drawings on printouts representing analysis of symmetry in Anasazi pottery design.