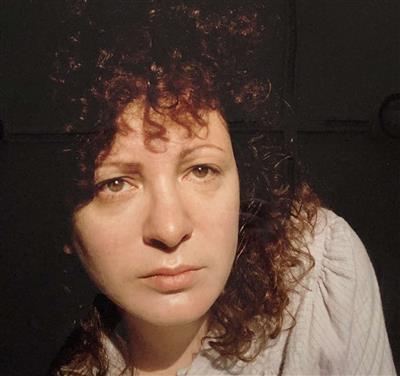 Nancy "Nan" Goldin (born September 12, 1953) is an American photographer. Her work often explores LGBT bodies, moments of intimacy, the HIV crisis, and the opioid epidemic. Her most notable work is The Ballad of Sexual Dependency (1986), which documents the post-Stonewall gay subculture and Goldin's family and friends. She lives and works in New York City, Berlin, and Paris.

Goldin was born in Washington, D.C. in 1953 and grew up in the Boston suburb of Lexington to middle-class Jewish parents. Goldin's father worked in broadcasting and served as the chief economist for the Federal Communications Commission. Goldin had early exposure to tense family relationships, sexuality, and suicide, as her parents often argued about Goldin's older sister Barbara who ultimately committed suicide when Goldin was 11:

Goldin began to smoke marijuana and date an older man, and by age 13–14, she left home and enrolled at the Satya Community School in Lincoln. A Satya staff member (experimental philosopher Rollo May's daughter) introduced Goldin to the camera in 1968 when she was fifteen years old. Still struggling from her sister's death, Goldin used the camera and photography to cherish her relationships with those she photographed. She also found the camera as a useful political tool, to inform the public about important issues silenced in America. Her early influences included Andy Warhol's early films, Federico Fellini, Jack Smith, French and Italian Vogue, Guy Bourdin and Helmut Newton.


Goldin's first solo show, held in Boston in 1973, was based on her photographic journeys among the city's gay and transgender communities, to which she had been introduced by her friend David Armstrong. While living in downtown Boston at age 18, Goldin "fell in with the drag queens," living with them and photographing them. Among her work from this period is Ivy wearing a fall, Boston (1973). Unlike some photographers who were interested in psychoanalyzing or exposing the queens, Goldin admired and respected their sexuality. Goldin said, "My desire was to show them as a third gender, as another sexual option, a gender option. And to show them with a lot of respect and love, to kind of glorify them because I really admire people who can recreate themselves and manifest their fantasies publicly. I think it's brave".


Goldin admitted to being romantically in love with a queen during this period of her life in a Q&A with Bomb "I remember going through a psychology book trying to find something about it when I was nineteen. There was one little chapter about it in an abnormal psych book that made it sound so ... I don't know what they ascribed it to, but it was so bizarre. And that's where I was at that time in my life. I lived with them; it was my whole focus. Everything I did – that's who I was all the time. And that's who I wanted to be".