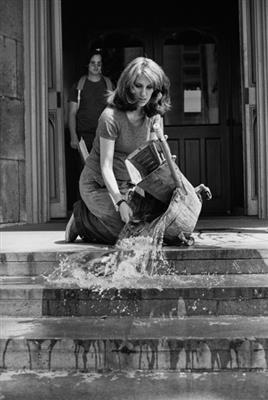 For almost half a century, Mierle Laderman Ukeles has been making art across a range of media and processes to challenge our ideas of work, care, and collaborative art practices. In her early work, Ukeles made abstract, messy, bodily sculptures, but it was her entrance into motherhood that provided a catalyst for her most significant and enduring idea of "maintenance art" and the "maintenance artist". Ukeles understood motherhood and domestic labor as a kind of maintenance work and wanted to make this work visible by framing it as an art practice. Ukeles has documented her encounters with different kinds of care-workers, including sanitation workers and cleaners, and has also undertaken massive environmental care work, in the case of her current long-term project regenerating a landfill site in New York.

Ukeles expanded on Marcel Duchamp's idea of the readymade, by stating not only that any found object can become art, but also that found actions, habits, and everyday activities, particularly those performed by women and working-class people, can be art too.

Mierle Laderman Ukeles (born 1939, Denver, Colorado) is a New York City-based artist known for her feminist and service-oriented artwork, which relates the idea of process in conceptual art to domestic and civic "maintenance". She is the Artist-in-Residence at the New York City Department of Sanitation and creates art that brings to life the very essence of any urban center: waste flows, recycling, sustainability, environment, people, and ecology.


As an undergraduate, Ukeles studied history and international studies at Barnard College and later began her artistic training at the Pratt Institute in New York. Ukeles is Jewish and the daughter of a rabbi. She earned a Master's degree from New York University in 1974 in Inter-related Arts. She is married and has three children.


In 1969 she wrote a manifesto entitled Maintenance Art Manifesto 1969! Proposal for an exhibition "CARE", challenging the domestic role of women and proclaiming herself a "maintenance artist". Aside from "personal" or household maintenance, the manifesto also addressed "general" or public maintenance and earth maintenance, such as addressing polluted waters. Her exhibitions were intended to bring awareness to the low cultural status of maintenance work, generally paying either minimum wage or no payments for housewives. Maintenance, for Ukeles, includes the household activities that keep things going, such as cooking, cleaning and child-rearing - and during her exhibitions, she performed the same tasks that she would perform in her daily life, including entertaining guests.


Several of her performances in the 1970s involved the maintenance of art spaces, including the Wadsworth Atheneum. Since 1977 she has been the Artist in Residence (unsalaried) of the New York City Department of Sanitation. She is the only artist to ever hold that position. In 2019, she received the Francis J. Greenburger Award for artists whom the art world knows to be of extraordinary merit but who have not been fully recognized by the public.


In 1989, Ukeles was commissioned by the Fresh Kills landfill  in Staten Island, to work on the reclamation project to transform the 2200-acre, largest manmade site, to a recreational park known as Freshkills Park. Ukeles invited New Yorkers from all five boroughs to contribute palm-sized artworks made of trash. After her years of working on this project, Fresh Kills was needed as a sorting facility for the rubble and remains of the September 11, 2001 attacks on the World Trade Center.


The role of the artist for Ukeles is that of an activist: empowering people to act and change societal values and norms. This agenda stems from a feminist concern with challenging the privileged and gendered notion of the independent artist. For Ukeles, art is not fixed and complete but an ongoing process that is connected to everyday life and her Manifesto for Maintenance Art proclaims the infection of art by everyday mundane activities.
The gargantuan domestic actions that she performed primarily became inaugurated out of her role as artist and mother in the 70s. After the birth of her first child in 1968, Ukeles believes that her public identity as an artist slipped into second place, because of the public perception of the role of a mother.