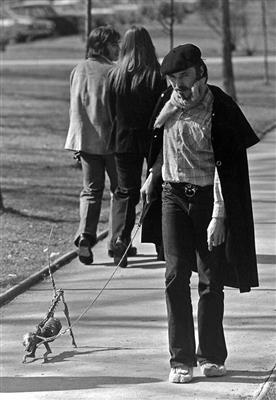 Lubo Kristek (born 8 May 1943) is a sculptor, painter, action artist and performer of Czech origin, who lived in West Germany from 1968 until the 1990s, at time that was crucial for him in reaching his artistic maturity.


In the 1960s, Kristek lived in a ramshackle house, a former soap factory, in Hustopeče, where he gathered artists around him and organised events incorporating music, visual art, poetry, theatre and improvisation. The testing of borders, experiments and crossing the conventional frame were typical for him from the very beginning.


At that time, he also experimented with using fire as a means of expression. It was his dialogue with the unpredictable. He deliberately suppressed or sometimes annulled his artistic handwriting to let the material talk.


The cosmopolitan aspects of Kristek's work and the ability to apply transcultural experience are linked with his emigration to West Germany in 1968. He settled in Landsberg am Lech and lived there for almost three decades. That was also where he started the tradition of Kristek's Night Vernissages, from which his happenings evolved. His studio in Landsberg became his artistic melting pot.


From Landsberg, Kristek travelled to many places in Europe to study (Belgium, Luxembourg, Liechtenstein, the Netherlands, France, Italy, Spain, Republic of San Marino, Switzerland, Austria). He explored various countries, enjoyed wandering through the landscape and meeting the inhabitants. These trips and explorations had a special meaning for him and brought him material for his creative work and development.


In 1977, Kristek travelled through the west coast of United States and Canada with his American Cycle 77.


Kristek's work attracted attention. In 1982, the Munich magazine Applaus mentioned some of his striking feats:


In 1989, after the Velvet Revolution, Kristek started on a return journey to his native country (he circulated between Germany, the Czech Republic and other countries for some time, but in fact, never lost contact with Germany). He settled in Podhradí nad Dyjí; on the apex of the roof of his studio, he located a sculpture of a piano balancing on one leg. Writer Jaromír Tomeček unveiled the sculpture in 1994 and on the basis of the artwork's title he called the entire neighbouring area of the Thaya Kristek Valley of the Divine Ephemerality of Tone.


The Minister of the culture of the Czech Republic, Václav Jehlička, wrote in this context:


In 2005–6, he created Kristek Thaya Glyptotheque, a sculpture pilgrims' way along the river Thaya.


One of Kristek's first artworks, called Vision – Burning of Christ (1964), originated in the house in Hustopeče and shows the artist's testing of material and values. First he created a realistic sculpture of Christ from cast iron, then he put this on a cross in a wooden construction and continued to shape it using flame. The melting material symbolised the relativity of shape, as well as the relativity of "melting" faith in Kristek's home country in the 1960s.