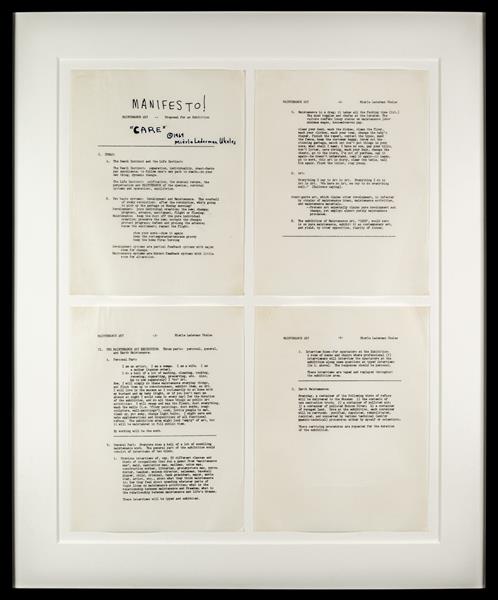 The tension Ukeles felt between her role as an artist and her role as a mother led her to write three-and-a-half page Maintenance Art Manifesto in 1969. The manifesto emphasizes maintenance (domestic, as well as general/public and earth maintenance) as a creative strategy. In the manifesto, she also challenges the domestic role of women, and proclaims herself a "maintenance artist". She explains that the manifesto came about when she "felt like two separate people...the free artist and the mother/maintenance worker.... I was never working so hard in my whole life, trying to keep together the two people I had become. Yet people said to me, when they saw me pushing my baby carriage, 'Do you do anything?'...Then I had an epiphany... I have the freedom to name maintenance as art. I can collide freedom into its supposed opposite and call that art. I name necessity art." She reiterates this view in the manifesto, writing, "I am an artist. I am a woman. I am a wife. I am a mother. (Random order). I do a hell of a lot of washing, cleaning, cooking, renewing, supporting, preserving, etc. Also, (up to now separately) I 'do' Art. Now I will simply do these everyday things, and flush them up to consciousness, exhibit them, as Art."

One part of the manifesto is a proposal for an exhibition titled Care, a show that "would zero in on pure maintenance, exhibit it as contemporary art." The show would be divided into three sections: personal (with Ukeles performing household chores in an art museum, thereby elevating domestic maintenance to the status of art), general (with Ukeles conducting interviews with members of the public about their relationship to maintenance), and earth (with various sorts of refuse being delivered to the museum, and then "rehabilitated" and "recycled"). The exhibition was never realized, as every institution she proposed it to rejected it. However, the proposal was pivotal in her career, as it laid the groundwork for the themes that would come to define it. The manifesto was one of the first artworks to make the work of the home, and mother, visible and to frame this work as art, and remains one of the most important text-based artworks in feminist and conceptual art histories - where the idea of the work is more important than what it looks like, or even if it was made at all!

The manifesto was published in Artforum in 1971 as part of a Jack Burnham article about the end of the avant-garde. This publication led to a relationship with an important feminist curator, Lucy Lippard. Lippard invited Ukeles to be in c. 7,500, an exhibition of female conceptual artists she curated in 1973. The exhibition started at CalArts, and then travelled all over the USA.