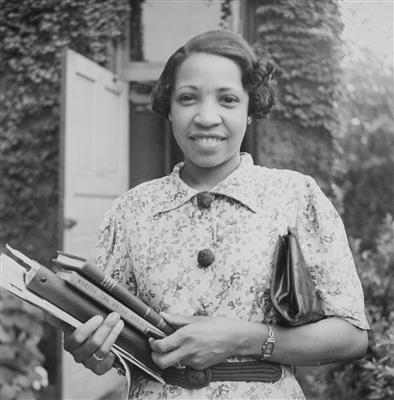 Loïs Mailou Jones (November 3, 1905 – June 9, 1998) was an influential artist and teacher during her seven-decade career. Jones was one of the most notable figures to attain notoriety for her art while living as a black expatriate in Paris during the 1930s and 1940s. Her career began in textile design before she decided to focus on fine arts. Jones looked towards Africa and the Caribbean and her experiences in life when painting. As a result, her subjects were some of the first paintings by an African-American artist to extend beyond the realm of portraiture. Jones was influenced by the Harlem Renaissance movement and her countless international trips. Lois Mailou Jones' career was enduring and complex. Her work in designs, paintings, illustrations, and academia made her an exceptional artist who continues to receive national attention and research.


Lois Mailou Jones was born in Boston, Massachusetts, to Thomas Vreeland and Carolyn Jones. Her father was a building superintendent who later became a lawyer after becoming the first African-American to earn a law degree from Suffolk Law School. Her mother worked as a cosmetologist. During her childhood, Jones' parents encouraged her to draw and paint using watercolors. Her parents bought a house on Martha's Vineyard, where Jones met those who influenced her life and art, such as sculptor Meta Warrick Fuller, composer Harry T. Burleigh, and novelist Dorothy West.


From 1919 to 1923, Jones attended the High School of Practical Arts in Boston. During these years, she took night classes from the Boston Museum of Fine Arts through an annual scholarship. Additionally, she apprenticed in costume design with Grace Ripley. She held her first solo exhibition at the age of seventeen in Martha's Vineyard. Jones began experimenting with African mask influences during her time at the Ripley Studio. From her research of African masks, Jones created costume designs for Denishawn.


From 1923 to 1927, Jones attended the School of the Museum of Fine Arts in Boston to study design, where she won the Susan Minot Lane Scholarship in Design yearly. She took night courses at the Boston Normal Art School while working towards her degree. After graduating from the School of the Museum of Fine Arts, she received her graduate degree in design from the Design Art School of Boston in 1928. Afterwards, she began working at the F. A. Foster Company in Boston and the Schumacher Company in New York City. During the summer of 1928, she attended Howard University, where she decided to focus on painting instead of design.


Jones’ career began in the 1930s and she continued to produce art work until her death in 1998 at the age of 92. Her style shifted and evolved multiple times in response to influences in her life, especially her extensive travels. She worked with different mediums, techniques, and influences throughout her long career. Her extensive travels throughout Europe, Africa, and the Caribbean influenced and changed how she painted. She felt that her greatest contribution to the art world was "proof of the talent of black artists". She wished to be known as an American painter with no labels. Her work echoes her pride in her African roots and American ancestry.