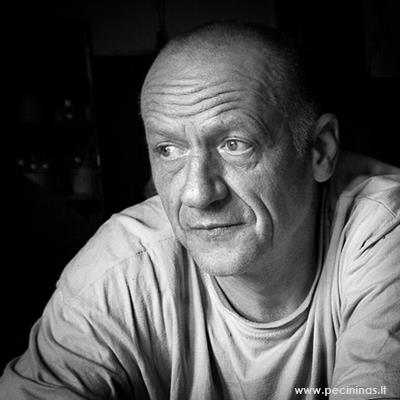 Šarūnas Sauka (born 1958 in Vilnius, Lithuania) is a postmodern painter. His father is an eminent Lithuanian philologist Donatas Sauka. In 1989, he was awarded the Lithuanian National Prize.

Šarūnas Sauka was born in 1958, in the Lithuanian capital of Vilnius. From 1976 to 1983, he studied at the National Institute of Lithuania, Vilnius Art Academy. In 1989, the artist was nominated for the Lithuanian National Prize for the diptych "Žalgirio mūšis" (English: Battle of Grunwald). His monumental painting "A Thousand Years for Lithuania" (2008-2012) is displayed in the Lithuanian Presidential Palace. Sauka now lives in Dusetos, a small and remote village among numerous lakes and forests.

He has two children, Monika Saukaitė, a painter, and Mykolas Sauka, a sculptor and writer.

Šarūnas' work, by both critics and laymen, is often referred to as "different". However, the "difference" in Sauka's paintings is quite consistent. Sauka's imagery is rich with religious symbolism, sharp contrasts of colour, characters and objects in a state of decay. The images of blood, organs, severed body parts and butchery are often found in his paintings. This literal dissection or deformation of the human form is possibly an expression of the author's belief that the human must be stripped from conventional chains in order to contemplate the true condition of its body and soul. In many of his paintings, he uses his own face, sometimes faces of his family members or relatives; the victim and aggressor usually both have the same face. A full appreciation of his artwork requires an understanding of the extent and cruelty of the communist terror in Lithuania and other countries of Eastern Europe and a grasp of some of the underlying metaphysical and archetypal ideas that are basic to his world view and sensibility.

Šarūnas is known for his somewhat isolated lifestyle (living and working in the remote village of Dusetos), reluctance to speak about his work or give interviews. He is extremely diligent, evident from his portfolio of hundreds of paintings.