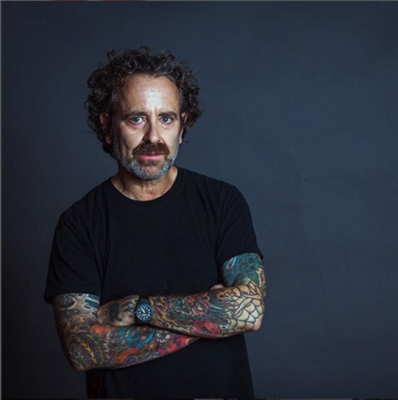 Dan Witz has had one of the most sustained careers of any street artist. He is perhaps known best for his witty, trompe l’oeil stickers and silkscreen paste-up posters, such as “Holes” (1996-99), a series of pieces he pasted around Brooklyn that suggested holes in their respective surfaces. In recent years Witz has turned to painting, mining the city of New York for inspiration and combining traditional and digital tools in his intensive processes. He begins with digital photographs, edits them in Photoshop, and then prints the images onto canvas as achromatic underpaintings. Like the Dutch masters, Witz then applies color with traditional glazing techniques, allowing him to create illusions of depth, form, light, and shadow, as in Big Mosh Pit (2007), for which he drew on his experiences as a musician in the 1980s for subject matter.

Dan Witz (born 1957) is a Brooklyn, NY based street artist and realist painter. He grew up in Chicago, IL, and graduated in 1981 from Cooper Union, on New York City's Lower East Side. Witz, consistently active since the late 1970s, is one of the pioneers of the street art movement.

Dan Witz's paintings have been shown in galleries throughout the US and Europe. In June 2010 a monograph, "Dan Witz. In Plain View. 30 Years of Artworks Illegal and Otherwise", was published by Ginkgo press.

Dan Witz received a National Endowment of the Arts grant, in 1983, and fellowships from the New York Foundation of the Arts, in 1992 and 2000

In 1983 Dan Witz's first book, “The Birds of Manhattan" was published by Skinny Books. His second book, In Plain View, was released in June 2010, by Gingko Press. In September 2010, Gingko Press will release "Hummingbirds, 2011".

Witz's work can be seen in the 2010 Banksy film, Exit Through the Gift Shop. In 2006 the Lou Auguste documentary, Open Air, featured the studios and methods of Dan Witz as well as five other American street artists: Faile, Skewville, Mike De Foe, Espo, and Tiki Jay. His work was also featured in the 2005 film, To Be Seen, by Alice Arnold.