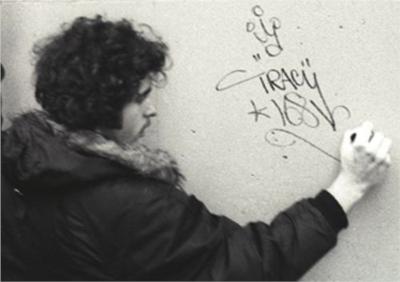 Inventor of a style of graffiti called the Wildstyle.

TRACY 168 (born Michael Tracy in 1958) is an American graffiti artist.

TRACY 168 was born at New York Hospital on E. 68 Street. He is one of the founding fathers of the art form; and created the Wildstyle style of graffiti. "Wildstyle" also refers to a crew he founded which has featured Chris Ellis ("Daze"), Lava I & II (of the "Black Spades"), Fernando Carlo Jr. ("cope 2"), Dan ("Plasma") Rauch, and others. He is featured extensively in the documentary Just to Get a Rep where he discusses WiLD STYLE and the troubled relationship between graffiti and the established art world. In July 2006, an art piece by Tracy 168 in 1984 utilized a real subway car door and showcased his piece on it. The piece was shown at the Brooklyn Museum of Art during their month-long exhibit, "Graffiti. "Tracy" was the mentor to many street and graffiti artists; Keith Haring and SAMO among them. Despite appearing in major gallery and museum shows "Tracy" maintains a solid street presence with his classic STREET MURALS in Brooklyn and the Bronx, where he currently resides. Tracy 168 is famous for his tags of a drawing called Purple Haze which relates and serves as a tribute to Jimi Hendrix. The artwork was part of the Experience Music Project.