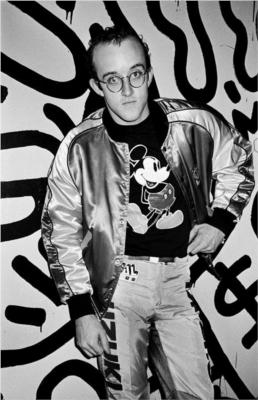 Keith Haring is one of the key members of a group of avant-garde New York-based artists who helped to redefine the boundaries of Modern art in the 1980s. His work run parallel to that of Jean-Michel Basquiat, Kenny Scharf, and other 1980s artists and engages with a variety of media and techniques, such as drawing, painting, body art, graffiti. Haring produced monumental public works that contributed to bringing recognition to Street art and to its entrance into museums.

Haring’s signature style is based on abstract, stylized forms worked into interlocking human figures and tightly arranged patterns. He used few basic colors in hyper-saturated hues, applied as flat areas of paint and shaped into thick silhouettes. He gave his works a distinctively graphic, cartoonish quality and relied on repetitive motifs in creating a visual commentary of both his private experiences and the larger culture of his time. Haring, indeed, sought inspiration for his artistic practice in the popular culture that surrounded him, from New York’s hip-hop scene to Disney's cartoons, and also engaged with the main social and political issues of his time, such as the AIDS epidemic, South African apartheid, and the American conservative politics of the 1890s.

Haring was born in Reading, Pennsylvania in 1958. He took up painting and drawing at an early age and moved to New York in 1978 in search for artistic inspiration, after dropping out of a commercial art school. In New York, he attended the School of Visual Arts, where he was exposed to the avant-garde propositions of the city’s vibrant artistic scene. He first experimented with a variety of media, producing performance pieces and painted environments in the technique of action painting. A series of drawings from 1978-1979, like Untitled (1978) and Untitled (1979) exemplifies Haring’s early interest in the exploration of abstract shapes interacting with vigorous, gestural markings within a carefully bordered space. These first experiments will lead to the creation of a distinctive style dominated by linearity, patterns, easily legible subject matters, a bright palette, and absolute freedom of expression. In 1980, he also moved towards figuration. His most recurring subjects include dancing human figures, crawling babies, barking dogs, flying saucers, pyramids, heart motifs, and other familiar elements.

The artistic tendencies of New York in 1980s provided Haring with a vibrant framework for the elaboration of his own artistic practice. His Street art works, which he began to make in 1982, include white-chalk drawings on sheets of black paper used to cover old advertisements and other surfaces in New York’s subway stations. He also actively engaged with the political scenario of his time. His cut-ups from 1980, collages of fake newspaper headlines, as well as his Subway Drawings (1982) commented on and blatantly attacked Ronald Reagan’s policies and the Catholic Church. Haring’s artistic vision was also influenced by Jean Dubuffet’s art theory and Robert Henri’s manifesto The Art Spirit (1923), which advocated creative freedom and the right to self-expression as the main driving forces in an artist’s work. These ideas are also evident in Haring’s lifelong commitment to the creation of a truly public art that was a direct and unmediated expression of his own feelings, easily understood by the audience.

Haring was an active participant in New York’s counterculture and completely immersed himself in the music and dance scene of DJs, hip-hop, and break dance. The element of improvisation, the pulsating rhythm and moves of hip-hop particularly attracted Haring, who transcribed these elements directly into his compositions and figures. Many of Haring’s human subjects can in fact be seen performing specific hip-hop and break-dance moves, such as head spins, the so-called “electric boogies”, which entailed dancers standing up and moving their hands and bodies in a robot-like manner, and other moves performed closer to the floor, involving thrusting bodies balancing on one hand. Some of the works that best exemplify the style and themes of Haring’s production are Free South Africa (1985) and Crack is Wack (1986). Fluorescent colors and thick, black lines shaped into silhouettes dominate these works. Haring surrounds the contours of his figures with thick markings and lightning bolts that emphasize the movement of the dancers and their physical interactions, which always take place on a single plane in a completely bi-dimensional space. His figures are engaged in intricate exchanges and gestures, with bent, interlocking limbs shaped into angular patterns that also recall the art of ancient Egypt. In these works, human bodies are densely arranged in rhythmic compositions, creating an overall visual effect of abstract, hyper-decorated surface.

In 1982, the artist held his first important solo gallery exhibition at the Tony Shafrazi Gallery in Soho and received an invitation to participate to Documenta, one of the most important venues for contemporary artists in the world. From 1984 to 1986, he gained increasing international recognition and critical attention. During these years, he showed his works in different galleries, including Leo Castelli Gallery in New York, Robert Fraser Gallery in London, and Galerie Watari in Tokyo, and worked on a series of public art projects around the world, such as painting a mural at the Melbourne National Gallery of Victoria (1984), creating backdrops and costumes for contemporary ballets, like Secret Pastures (1984), and designing a logo for an anti-litter campaign for the city of New York. This extremely varied string of commissions, which were often linked to humanitarian causes that Haring particularly cared about, contributed to establishing his style as iconic and recognizable. In 1986, he opened his own Pop Shop in Manhattan, selling merchandise and items decorated with his own characteristic images. In the same year, the Checkpoint Charlie Museum invited him to paint on the Berlin Wall.

The desire to create art with the purpose of enriching the life of different communities was central to Haring’s life and career until a few months before his death in 1990, which took place in New York due to AIDS-related complications. Many of his works, such as Ignorance=Fear (1989) and Stop AIDS (1989), actively engaged with the AIDS epidemic, seeking to raise awareness and eliminate the stigma attached to the disease. In Safe Sex (1988), the artist promoted disease prevention by candidly and effectively depicting a scene of homosexual love-making in his usual cartoonish and hyper-colourful style. His final work was the design of a stamp and envelop commissioned by the Word Federation of United Nations Associations to illustrate the association’s commitment to the fight against AIDS. Haring’s public art still resonates powerfully in contemporary culture, thanks to its recognizable style, unique embrace of the most joyous aspects of human experience, and the intense engagement with political and social realities.

Keith Haring was born in Reading, Pennsylvania, on May 4, 1958. He was raised in Kutztown, Pennsylvania, by his mother Joan Haring, and father Allen Haring, an engineer and amateur cartoonist. His family attended the United Church of God. He had three younger sisters, Kay, Karen and Kristen. He became interested in art at a very early age spending time with his father producing creative drawings. His early influences included Walt Disney cartoons, Dr. Seuss, Charles Schulz, and the Looney Tunes characters in The Bugs Bunny Show.

In his early teenage years, Haring was involved with the Jesus Movement. He eventually left his religious background behind and hitchhiked across the country, selling vintage T-shirts and experimenting with drugs. He studied commercial art from 1976 to 1978 at Pittsburgh's Ivy School of Professional Art but lost interest in it. He made the decision to leave after having read Robert Henri's The Art Spirit (1923), which inspired him to concentrate on his own art.

Haring had a maintenance job at the Pittsburgh Center for the Arts and was able to explore the art of Jean Dubuffet, Jackson Pollock, and Mark Tobey. His most critical influences at this time were a 1977 retrospective of the work of Pierre Alechinsky and a lecture by the sculptor Christo in 1978. Alechinsky's work, connected to the international Expressionist group CoBrA, gave him confidence to create larger paintings of calligraphic images. Christo introduced him to the possibilities of involving the public with his art. His first important one-man exhibition was in Pittsburgh at the Center for the Arts in 1978.

He moved to New York in 1978 to study painting at the School of Visual Arts. He also worked as a busboy during this time at a nightclub called Danceteria. He studied semiotics with Bill Beckley as well as exploring the possibilities of video and performance art. Profoundly influenced at this time by the writings of William Burroughs, he was inspired to experiment with the cross-referencing and interconnection of images. In his junior/senior year, he was behind on credits, because his professors could not give him credit for the very loose artwork he was doing with themes of social activism.

He first received public attention with his public art in subways where he created white chalk drawings on a black, unused advertisement backboard in the stations. Keith considered the subways to be his "laboratory", a place where he could experiment and create his artwork. Starting in 1980, he organized exhibitions at Club 57, which were filmed by the photographer Tseng Kwong Chi. Around this time, "The Radiant Baby" became his symbol. His bold lines, vivid colors, and active figures carry strong messages of life and unity. He participated in the Times Square Exhibition and drew animals and human faces for the first time. That same year, he photocopied and pasted provocative collages made from cut-up and recombined New York Post headlines around the city. In 1981, he sketched his first chalk drawings on black paper and painted plastic, metal, and found objects.