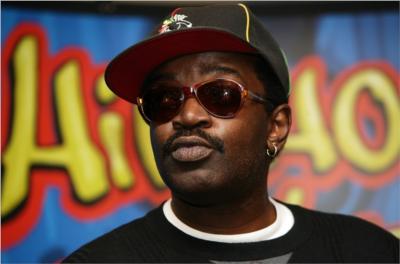 Fred Brathwaite (born August 31, 1959) more popularly known as Fab 5 Freddy, is an American visual artist, filmmaker, rapper and hip hop pioneer. He emerged in New York's downtown underground creative scene in the late 1970s as a camera operator and a regular guest on Glenn O'Brien's public access cable show TV Party. There he met Chris Stein and Debbie Harry. He was immortalized in 1981 when Harry rapped on the Blondie song "Rapture" that "Fab 5 Freddy told me everybody's fly." In the late 1980s, Fab 5 Freddy became the first host of the groundbreaking and first internationally telecast hip-hop music video show Yo! MTV Raps.

In the late 1970s, Freddy became a member of the Brooklyn-based graffiti group the Fabulous 5, known for painting the entire side of New York subway cars. Along with other Fabulous 5 member Lee Quiñones, under his direction they began to shift from street graffiti to transition into the art world and in 1979 they both exhibited in a prestigious gallery in Rome Italy, Galleria LaMedusa. In 1980, he painted a subway train with cartoon style depictions of giant Campbell's Soup cans, after Andy Warhol. He was the bridge between the New York uptown graffiti and early rap scene and the downtown art and punk music scenes. "I was bringing the whole music, hip-hop, art, break dancing, and urban cultural thing to the downtown table," he said.

At the end of 1980, Glenn O'Brien cast Freddy, along with fellow Lower East Side graffiti writer Lee Quiñones, in the film New York Beat (later released as Downtown 81). That film showcased artist Jean-Michel Basquiat in his Lower Manhattan environment and the culture that surrounded it. Shortly after, Freddy began production along with filmmaker Charlie Ahearn on his film Wild Style (1982), which showcased artist Lee Quiñones in the Uptown, Manhattan environment of the Bronx and the music that surrounded it.

In April 1981, Freddy co curated with Futura 2000 the graffiti-related art show Beyond Words, at the Mudd Club which contained their own work along with Jean-Michel Basquiat, Rammellzee, Keith Haring, Kenny Scharf and others. This was the first time the many members of the Bronx hip hop scene had appeared in the downtown New York City art world. On his relationship with art dealers, Freddy explains, "They didn’t know me, but they had heard of graffiti. But they didn’t understand the importance and the significance of what happened because, see, really what this comes down to is that my background basically is that of a vandal. I vandalize public property....In the real world, in New York, what made graffiti what it is, was the marriage which was the placing of the individual’s mark on that blank surface. But that blank surface that the individual graffiti person tags on, belongs to someone." The following month, Freddy was booked on Henry Chalfant's "Graffiti Rock" performance with Rock Steady Crew at Common Ground gallery in SoHo (not to be confused with Holman's Graffiti Rock TV show pilot). That show was cancelled due to violence, but was rescheduled in October at another venue called The Kitchen.