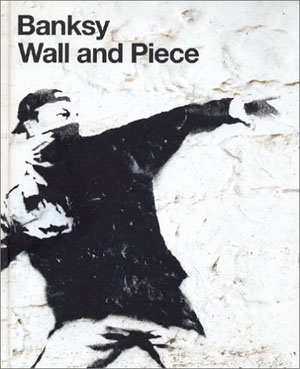 The cover of Banksy's 2005 compilation, Wall and Piece.

Banksy is an anonymous England-based graffiti artist, political activist and film director. His satirical street art and subversive epigrams combine dark humour with graffiti executed in a distinctive stenciling technique. His works of political and social commentary have been featured on streets, walls, and bridges of cities throughout the world. Banksy's work grew out of the Bristol underground scene, which involved collaborations between artists and musicians. Banksy says that he was inspired by 3D, a graffiti artist who later became a founding member of the English musical group Massive Attack.

Banksy displays his art on publicly visible surfaces such as walls and self-built physical prop pieces. Banksy does not sell photographs or reproductions of his street graffiti, but art auctioneers have been known to attempt to sell his street art on location and leave the problem of its removal in the hands of the winning bidder. Banksy created a documentary film, Exit Through the Gift Shop, billed as "the world's first street art disaster movie", which made its debut at the 2010 Sundance Film Festival. The film was released in the UK on 5 March 2010. In January 2011, he was nominated for the Academy Award for Best Documentary for the film. In 2014, he was awarded Person of the Year at the 2014 Webby Awards.

Banksy started as a freehand graffiti artist in 1990–1994 as one of Bristol's DryBreadZ Crew (DBZ), with two other artists known as Kato and Tes. He was inspired by local artists and his work was part of the larger Bristol underground scene with Nick Walker, Inkie and 3D. During this time he met Bristol photographer Steve Lazarides, who began selling Banksy's work, later becoming his agent. By 2000 he had turned to the art of stencilling after realising how much less time it took to complete a work. He claims he changed to stencilling while hiding from the police under a rubbish lorry, when they noticed the stencilled serial number and by employing this technique, he soon became more widely noticed for his art around Bristol and London. He was the goalkeeper for the Easton Cowboys and Cowgirls football team in the 1990s, and toured with the club to Mexico in 2001. Banksy's first known large wall mural was The Mild Mild West painted in 1997 to cover advertising of a former solicitors' office on Stokes Croft in Bristol. It depicts a teddy bear lobbing a Molotov cocktail at three riot police.

In July 2011 one of Banksy's early works, Gorilla in a Pink Mask, which had been a prominent landmark on the exterior wall of a former social club in Eastville for over ten years, was unwittingly painted over after the premises became a Muslim cultural centre.