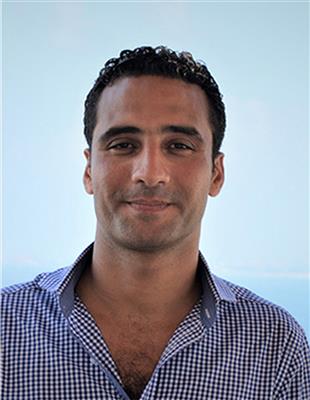 
Alaa Awad is an Egyptian painter and muralist based in Luxor, Egypt.


Currently, he is a PhD candidate and serves as an assistant lecturer in the Department of Mural Painting, for the Faculty of Fine Arts, at South Valley University in Luxor, Egypt. His murals and public art became well known in late 2011 and early 2012 after he took a break from teaching to paint a mural in Cairo, in this moment the Port Said Massacre unfolded which changed the course of his plans and shifted his mural into a memorial mural. What was meant to only be a short period of time in Cairo became a much longer time for Awad as he continued to paint new murals on Mohamed Mahmoud Street in Cairo.


Awad's PhD dissertation working title is, “Artistic Vision Inspired by The Murals of War and Peace in Ancient Egyptian Art” and is expected to be released in 2019.


In regards to his murals, Alaa chooses to paint with a brush and uses acrylic paints rather than using stencils and spray paints. His intricate paintings can sometimes take up to a week to complete, not only because of the materials he uses, but because of the complexity of his designs. Awad paints in a neo-pharonic style, a style that harkens back to Ancient Egypt. His usage of the neo-pharonic style is meant to draw attention back to the rich, old Egyptian traditions. This style aims to remind the Egyptian people of their heritage and past, a reminder to stay true to their Egyptian identity. His murals are typically multifaceted and multi-layered with each telling a different story.


Beyond the aforementioned unique style of painting, using a neo-pharonic style aims to return the prominence of public murals in Egypt. Public murals have played a significant role in Egyptian villages in the past, when each village had their own muralist. These muralists would essentially be storytellers of the village and would depict important events or celebrations through traditional imagery and symbolism. Many of these same images can be seen in Awad's artwork today as he is inspired from the famous works of art from Ancient Egypt that may be seen in temples and museums.